Posted on February 6, 2015 by eileendandashi

He built impenetrable walls around his heart….

The Black Death showed no mercy when it took Rowan Graham’s beautiful, young wife. With his clan nearly decimated, his heart torn to shreds, he is left to raise his newborn daughter alone. Rowan tries to keep the promises he made to Kate on her deathbed, save for one: He is unable to give his heart to another.

She has built walls around her own…

Lady Arline is forced into yet another arranged marriage — loveless and lonely. Behind Garrick Blackthorn’s good looks lies a cruel, vindictive man. She wants nothing more than her marriage to end so that she might gain the freedom she has longed for.

Fate will bring those walls tumbling down….

Just before her marriage comes to a bitter and ugly end, her cruel husband kidnaps a sweet, innocent child. Arline does not realize the child belongs to a man from her past, a man who has haunted her dreams for more than seven years, until the night he comes to rescue his daughter.

Rowan Graham is surprised to learn that his enemy’s wife is a woman he met but for a few short moments seven years earlier when dark times had fallen across Scotland. The same woman who had helped ensure the freedom of his foster father and brother has been risking her life to care for his daughter.

Fate brings them together…but others are determined to pull them apart.

My Thoughts: This was the first book I’ve read of Suzan Tisdale and it won’t be my last. The second of the series, Frederick’s Queen, is also available.

She has a bard’s talent effortlessly beguiling the reader through its telling. The novel was long, engagingly so, enabling me to really get to know each of the characters’ flaws, strengths and conflicting circumstances.

Lady Arline’s plight was one that women world-wide would never care to find themselves in. She was a lady who felt she must do the right thing. Many of her years were met doing the right thing, but perhaps life doesn’t allow us to see what is entailed with doing the right thing and then we also might ask, right for whom. Plenty of story to ponder this thought.

Lady Arline was a strong woman, having a heart of gold. She suffered much at the hands of Laird Blackthorn, her husband. She didn’t worry about her own physical well-being, when her honor and doing the right thing made her step forward to save a young child from almost certain death, death brought on by the cruelty of her husband.

Eventually, Lady Arline realizes she’s a pawn in a man’s world where few, if any, are concerned about her needs. She suffered much to arrive to this point. This woman is made of grand stuff.

I am sure you will fall in love with the hero of the story, Rowan Graham, who loves his daughter, Lily, more than life, living a chastise life since his wife’s death some four year’s previous. You will feel his struggle as he begins to overcome his loneliness while struggling with the guilt of not being faithful to his lovely departed wife, Kate.

This story also points out vividly we shouldn’t assume we know something when we truly don’t know the detail of events. Society is quick to ridicule, stereotype and whenever possible, grind unfortunates into dust.

No more need be said, read the book and if you get the chance to hear it in audiobook, Brad Wills does the narration and his production work is superb.

I recommend this book. If you want to read Rowan’s Lady with some other amazing authors, there are a couple of bundles out where Ms. Tisdale’s Rowan’s Lady is included. As of this post, Amazon has the Lairds, Lords & Lovers: 10 full-length novels from the Queens of Medieval Romance for $1.99 and Border Brotherhood: Medieval Heroes of England and Scotland only $.99! 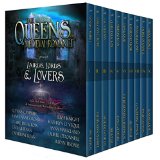 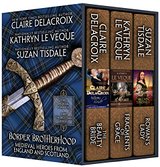 About the Author: Winner of the 2014 RONE Award for best Historical Romance Novel — Rowan’s Lady.

Suzan lives in the Midwest with her verra handsome carpenter husband and the youngest of their four children. Monetary donations are currently being accepted to help feed their 16-year-old, 6’3″, built-like-a-linebacker son and keep him in shoes.

Some people say she is obsessed with writing. Suzan prefers to think of it as a passion. While there is great joy in writing, the biggest joy comes in sharing what you’ve written with the world. So she writes passionately and shares her work joyfully with the intent of bringing smiles to her readers’ faces.

I include Suzan Tisdale’s chat about herself – pulled from her website: http://www.suzantisdale.com

I’ve been writing since childhood. Everything from short stories, full length novels, screenplays and even dabbled at poetry. I wrote because I loved it and it was also a means of escaping. I was horribly, painfully introverted. My stories allowed me to be whoever I wanted to be.

My secret dream was to be an author, but I never thought it would be possible. I knew how hard it was to ‘get published’ so I didn’t even bother to submit any of my work to a traditional publishing house.

It was an accidental journey to becoming a full time, published author. I tell people that I didn’t do it on purpose, even though it was a lifelong dream.

It started out as a whim of sorts. I wanted to give my mother a Kindle for her birthday. I thought it would be a hoot if when she turned the Kindle on for the first time, the first book she saw would be something I had written. And so it began.

I would get up at 3:30 every morning just to write. At the time, we only had one computer in the house so very early morning hours were my only opportunity to write. My husband thought I was getting up early to play Farmville!

I shared a few chapters with a very dear friend of mine, thinking she’d say “Cute. But don’t give up your day job.” I was floored when she emailed me back and said, “Where is the rest of it?? I want to read more!” I thought she was just being nice.

Somewhere along the way, my husband had discovered my little book on the computer. I had to come clean and explain to him what I was doing. I also asked him for help. I’m not a technical person, but I figured there had to be a way to do get my book onto Mamma’s Kindle. Now, anyone who knows my husband knows what a research nut he is. Give him the most obscure or offbeat or technical idea or question and he’ll research the heck out of it! I had explained to him that I had seen a link at Amazon that said “Publish Your Book To Kindle”, but that I hadn’t bothered with it. I was convinced that all I needed was a ‘cord’ of some sort to hook up between my computer and Mamma’s Kindle.

A few days later, my husband informed me that I couldn’t just put my book on mom’s Kindle. I had to actually publish it. I believed him. He’s smart, this husband of mine and he’d never lied to me before.

I figured what the heck, go for it. What did I have to lose? No one would want to buy my book anyway. Now, deep down I had a secret desire to actually sell a copy, but I wouldn’t speak the words out loud. I thought it would be wonderful if I sold just ten little copies. In my lifetime. Ten. That was a good goal.

Without the aid of an editor or cover artist and not having a clue what I was doing, I decided to go for it. I figured that I didn’t want to wake up on my 60th birthday and wonder what if…. So In December of 2011 I published Laiden’s Daughter.

By February of 2012, it was number 2 on Amazon’s Top 100 Best Seller’s List! Blew. My. Mind. I thought it would take a lifetime to sell ten copies. I was certain it had to be a mistake of some kind. But when I started getting one message after another, one positive review after another, I realized it wasn’t a mistake….I was now an author.

I was selling more than 250 copies a day! I didn’t have a clue what that meant, if in fact it meant anything at all. All that I knew was that I was over-the-moon happy and people were asking for more!

I remember my first royalty check from Amazon/KDP. $78.69. I cried because I felt like I had arrived. By October of 2012, I was able to give up my day job (selling insurance) in order to write full time. That still blows my mind. I am able to do things now that would not have been possible prior to December of 2011. I have the most amazing life.

In all honesty, it has never been about the money, it’s always been about the writing. Are my books perfection personified? Hardly. But I do know that my writing gets better with each new book — and that is how it should be. I want to write stories that people will enjoy. I want to help people escape the ordinary, for just a little while.

Now, I have a beautiful editor, a very talented cover artist, and other indie authors who are very dear friends. I even have a street team! Suzan’s Highland Lassies. This is a group of beautiful, sweet and smart women who I consider dear friends. I couldn’t get through a book launching without them!

I also believe I have the most beautiful readers anywhere. I know that I would not be where I am today if it were not for them.

So there you have it. I’m proof that dreams can come true and that happily-ever-afters are real.

I am a lover of books, both reading and writing. 2018 marks the beginning of my own journey from writer to published author. This blog will showcase various authors' thoughts on the elements of novel crafting, and my attempts to find my voice in writing. While journaling this journey, I hope to encourage others to follow their dreams. Book reviews continue as I have the last four years, only making time for my new pursuits.
View all posts by eileendandashi →
This entry was posted in Book Reviews, Historical Romance, Medieval Romance, Romance, Romantic Suspense, Women's Fiction and tagged Book Review, Romance, Rowan's Lady, Suzan Tisdale. Bookmark the permalink.