Posted on December 12, 2014 by eileendandashi 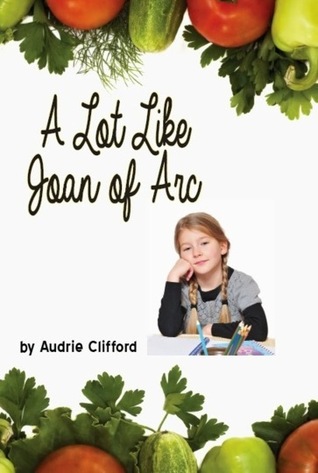 About the Story: Janie thinks she and her friends in the city are all set with their plans for cell phones, tattoos, piercings, and smoking until her dad announces the family is moving to a small town with none of the big-city attractions.

Despite her protests, she soon finds herself in a place that doesn’t even have a mall, and on one of her first days there, the old lady next door yells at her for trying to pet the old lady’s cat, and that makes things even worse.

Janie convinces her dad that she’s capable of caring for a dog since she has no other companions, but her secret intent is to have a big dog to terrify the old lady’s cat. Janie gets the dog and that’s only the beginning of the changes that come into her life because of the change of locale. She tells her own story and it’s delightful to see how a nine-year-old looks at different situations.

A Lot Like Joan of Arc is fun to read—no matter what your age—and you’ll find several characters that will work their way into your heart.

My Thoughts: Audrie Clifford writes as she is. She lives outside the box and she writes the same way. Every one of her books are quite a bit different. They don’t follow the norm for a novel. There are no arcs, no particular climatic moment, and yet all her books are amazingly entertaining.  This book is for readers who remember it when, for those seeking a happier and simpler existence in a smaller town and for those who enjoy hearing what a 9-year-old has to say.

This story is a journal of sorts, written in first person, by a 9-year old. Audrie took the challenge. She wanted to see how a 9-year old thought and interacted with older people as well as dealing with life challenges. I think she did a superb job.

Janie was forced to move from the life she knew in the city. It wasn’t something she looked forward to. So many challenges faced her and she learned from them all. If she were my granddaughter, I would love her to pieces. I wonder if this little girl was from Audrie’s imagination or she somehow mirrored one of her great granddaughters.

Janie found out the scary old next door neighbor wasn’t so bad after all. In fact, you could say she became her very best friend, learning about flowers, growing vegetables and understanding people. Ah, older people can have such an influence on young minds.

Janie learned to not depend on cell phones, television and all trappings of a city life. Did she go to a cinema? No. Did she go to malls? No. She learned to bike, something she never had the opportunity to do in the city. The city streets were just too unsafe. She got to move freely within her small community. She went camping, she visited the countryside. She was able to have a dog, something she’d always wanted. There is much to be said about living outside a city!

She also learned that people have reasons they act as they do and people can be forgiven for past actions.  Janie writes about some very touching moments experienced during 4th grade.

All of Jane’s elder acquaintances, helped teach her life lessons–some older folk haven’t learned yet. Those she didn’t like at first, she found she really did. Within the story, Janie learned that she had a grandmother who was lonely and had put herself in a self-imposed solitary life. The love and passion of this small little girl with her loving letters to her new-found grandmother was the catalyst of reuniting her family.

Do you like the unusual? A story that just makes you feel good? Audrie has does that for me. I enjoyed the story, and its implication for a life outside the city and how much the old learn from the young and the young learn from the old.

I asked author, Audrie Clifford to host a tea party with some of her characters in her books.  This little get together is just too funny, when you know the personality of each of her characters and get to know Audrie.  Ladies, let the tea begin!

AC:     “I’ve asked you all to meet with me for the simple reason that I’m very fond of each of you, and thought you might like to get acquainted.”

MM:     “Just what I said. Janie and I love each other, but I don’t know the other two of you, and I’m not one to assume I’ll like someone before I get to know them.”

AC:      “Yes, I am, Janie, but look how special that makes you. You’re the only ten-year-old that has been invited.

MW:     “I don’t mean to be pushy, but aren’t you going to offer us anything to drink? Talking a lot always makes my mouth dry.”

MW:     “My preference would have been for something a bit stronger, but for tea, this is very good.”

J:           “Well, Megan and I are still in the fifth grade and everything’s okay, but right now, we’re kinda dazzled by what’s going on with our friend, Heather. She’s halfway through sixth grade and she’s starting to develop boobs. Mom says that’s natural and it happens to all girls sooner or later, but Megan and I think it really looks funny. We sit by each other at the lunchroom cafeteria table and Heather and Cicely sit on the other side, and all we can see are these little bumps under her tops. We have to pinch each other to keep from giggling. We’re sure never gonna let that happen to us.”

MW:     “Well, I think you all know that I died, and I’ll have to tell you that I didn’t mind a bit. I was in my ninety’s and didn’t really have that much to look forward to. I’d had a good life and as soft and easy a death as can be imagined, so I’d say I was pretty damn lucky.”

MM:     “Maggie, I really think you should be more careful of your language around Janie.”

MW:     “Oh piddle. By the time a kid is in the fifth grade, they have heard every swear word in the English language. Anyway, back to my doings—being in the afterlife isn’t quite like our friend the writer described it in one of her other books, but some of her speculations weren’t that far off. My main source of pleasure here is that I get to be with my sweet friend, Cassie, and I haven’t run into that sonofabitch Burt.”

MW:     That’s impossible to explain. You can’t know for sure until you die.”

AC:      “The conversation is getting a little heavy. Let’s change it by hearing what Mrs. M has to say.”

MM:     “Perhaps the most blessed event of my later years was when Janie’s parents bought the house next to mine and became like extended family. I have real family whom I love a great deal, but they don’t live near me. Despite the phone calls and occasional visits, I was lonely most of the time until that precious, precocious person became my next-door neighbor. Janie didn’t know a thing about plants or gardening until I taught her, but she’s a natural. We’ve reached the point now that she knows almost as much about gardening as I do, and I’m sure that in time her knowledge will far surpass mine. I spend most of my time in the same way I have in the past several years. Janie and I grow magnificent vegetables, and I take a great deal of pleasure in preserving them for later use. I’m sure you’d marvel at my canned tomatoes, my pickled green beans, and the pickled beets that I don’t believe Janie ever mentioned. Life for me is calm and predictable and good.”

AC:      “Oh goodness, nothing exciting here. I live alone in a small apartment, and unfortunately, I’m a neat person. I don’t make messes so I don’t have stuff to clean up. I have wonderful friends that drag me out to do things, but you can’t expect friends to supply all the satisfaction that would be achieved that you’d feel if you had actually done something of consequence. So I write. I start with a vague idea—How about if I wrote about an old lady in a nursing home? Or: I wonder if I could write a whole book from a kid’s point of view.     I simply start and let it develop from there. The best part is that I come to love the persons who exist in my pages. They, too, are a part of my life. And that makes me wonder: Who’s next?

Another Damn Newcomer
Dimensions
Maggie Whitson
From These Roots

I am a lover of books, both reading and writing. 2018 marks the beginning of my own journey from writer to published author. This blog will showcase various authors' thoughts on the elements of novel crafting, and my attempts to find my voice in writing. While journaling this journey, I hope to encourage others to follow their dreams. Book reviews continue as I have the last four years, only making time for my new pursuits.
View all posts by eileendandashi →
This entry was posted in Book Reviews, Character Blast, Coming of Age, Real-Life Fiction and tagged A Lot Like Joan of Arc, Audrie Clifford. Bookmark the permalink.