Posted on December 8, 2014 by eileendandashi 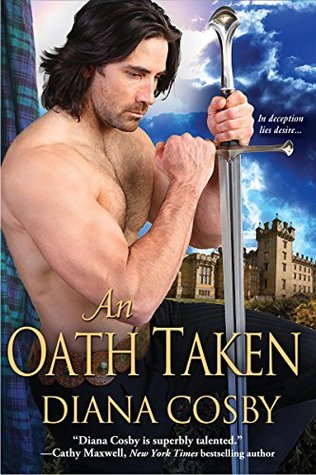 As the new castellan, Sir Nicholas Beringar has the daunting task of rebuilding Ravenmoor Castle on the Scottish border and gaining the trust of the locals—one of whom wastes no time in trying to rob him. Instead of punishing the boy, Nicholas decides to make him his squire. Little does he know the thieving young lad is really…a lady.

Lady Elizabet Armstrong had donned a disguise in an attempt to free her brother from Ravenmoor’s dungeons. Although intimidated by the confident Englishman with his well-honed muscles and beguiling eyes, she cannot refuse his offer.

Nicholas senses that his new squire is not what he seems. His gentle attempts to break through the boy’s defenses leave Elizabet powerless to stem the desire that engulfs her. And when the truth is exposed, she’ll have to trust in Nicholas’s honor to help her people—and to surrender to his touch…

My Thoughts: Elizabet impersonates a lad to gain coin to somehow free her brother and father risking her life by reiving. Here we find what mettle Elizabet is made of. She lets loose an arrow to the unsuspecting Nicholas as he’s riding his horse close to a tree, demanding coin from him. The situation does not go as Elizabet planned, however, due to Nicholas’s compassion for the lad’s need for thievery. He offers her employment as his squire extracting a promise of fealty from her.

I fell in love with the amiable and compassionate Nicholas from the first pages of the story. He dealt with people fairly, although there were times when Elizabet impersonating a lad or as herself, sorely taxed his patience. Elizabet fell in love with the complete package of who Nicholas was, albeit he was a Sassenach. And when finally surrendering her heart, she gave it completely.

At times of danger and fear, faery dust seemingly floats with the dust of the chamber, protecting the good of heart when evil forces lurk.

There are many moments of chuckle-worthy scenes as both Nicholas and Elizabet are not without their amusing sides. How does Elizabet deal with washing Nicholas’s back and shoulders as his squire? When Nicholas finds that he is drawn to this lad with more than compassion, feeling sexual inclinations, he is aghast with these feelings and wants to send ‘Thomas’ away to his brother to apprentice him. This internal conflict preys on Nicholas for how can he be such a pervert? It is really comical (to him a relief only after being furious for being taken a fool) when he finds ‘Thomas’ swimming looking very much a lovely maid sans clothes!

Elizabet is a stubborn, loyal, passionate noble women who will not stop at anything to protect those she loves. She’s also a bit more than just a spirited lass. Her father and brother, along with their warriors were captured, left to rot in the dungeons of Ravenmoors Castle. Sir Renaud, the previous castle’s castellan found his demise at the end of a Scotsman’s sword. Nicholas was his replacement, sent by King Edward to bring peace to the borderlands. Nicholas knew he needed to have their trust and set out rebuilding Ravenmoor castle, giving back its people their dignity. He was a good man.

Elizabet, dressed as a lad became squire to the handsome, compassionate Nicholas giving her ample opportunity to visit the dungeon to locate her people and the brother and father. Nicholas had forbade Thomas to enter the dungeon when he heard that men were dying and rotting within its bowls. But Elizabeth could not be kept away. She had to rescue her people from the cruel and unjust arm of Longshanks. She sees her dead father being carried out and her brother close to death with a bad fever.

Nicholas finds Thomas at every turn disobeying him. He wants to throttle the boy, but compassion and his desire to befriend the boy makes him soft, especially when Thomas pleads with him. She wants to hate Nicholas, but can’t. She admires and respects him. How can she respect the enemy? When her respect turns to like, she decides she must get away from him as soon as possible. But how can she leave the castle? She MUST save her people. Elizabet is also conflicted about her own worth. She had always felt she wasn’t what she should be. She never felt the love of her father after her mother died.

The author writes in an articulate and eloquent style, most sentences pithy and succinct with three-dimensional character development flowing easily from her pen. Her words build the scene and its surrounding with clear strokes. As the tale moves forward, she ratchets up the suspense and fear factors where the reader is no longer a passive observer, but is brought to the edge of her chair, stomach knotted not guessing what Elizabet’s bold moves will trigger.

Diana Cosby’s first book of this series is a thoroughly enjoyable tale. I look forward to continue the trilogy when she releases her second book in June, 2015.

I am a lover of books, both reading and writing. 2018 marks the beginning of my own journey from writer to published author. This blog will showcase various authors' thoughts on the elements of novel crafting, and my attempts to find my voice in writing. While journaling this journey, I hope to encourage others to follow their dreams. Book reviews continue as I have the last four years, only making time for my new pursuits.
View all posts by eileendandashi →
This entry was posted in Book Reviews, Historical Romance, Medieval Romance, Romance, Romantic Suspense, Women's Fiction and tagged An Oath Taken, Book Review, Diana Cosby, Medieval Historical Romance, The Oath Trilogy. Bookmark the permalink.

2 Responses to Review: AN OATH TAKEN by Diana Cosby