Not only can Diana Cosby write some serious medieval romance, she’s able to catch an expressive moment in time with her photography.

Posted on November 20, 2014 by eileendandashi

If you’re Facebook friends with Diana Cosby, you’ve already seen some of her wonderful photography.  These are pictures worthy of being published in a large picture book.  I can also see them as wall-art photography for homes and offices. I hope to badger her enough that she’ll published such a book sooner rather than later.  Along with her pictures I’ve added a few tidbits about each of the birds.  What an amazing animal!

Hummingbird  There are 17 known species of hummingbirds. Their southward migration is between July and November. Some hummingbirds don’t migrate if the weather is temperate enough such as southwestern California.  These fast-moving birds migrate because of hormonal changes that occur with fewer daylight hours.  If you are a bird-lover, make sure to keep your feeder well-stocked because they’ll need double their normal body weight to make the journey. 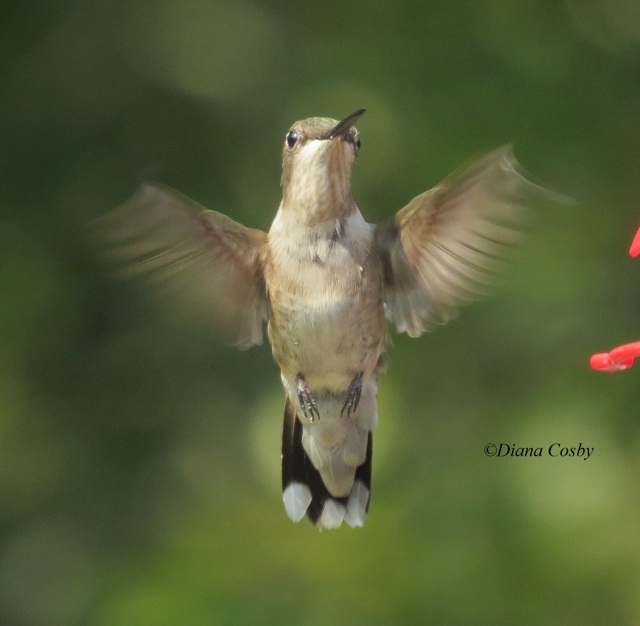 Tufted Titmouse These little birds, live in the eastern third of the U.S.  They hoard food in fall and winter, reminiscent of what we know about squirrels. They’ll take advantage of your bird feeder’s by storing many of the seeds they get. They’ll actually shell the seed before they put it into their hiding place, often locating their nests in tree caities or will use a previous woodpecker’s home.

Pair of Red Tailed Hawks   There are 14 known species of this bird, known as chickenhawk as well. The female is 25% larger than the male. They soar above open fields, slowly turning circles. Other times you’ll see them atop telephone poles, and I’ve seen them on house chimneys with their eyes fixed on the ground to catch the movements of a vole or  rabbit.

Bluebird Eastern Bluebirds live in meadows surrounded by trees they use for nest holes.  By putting up a nest box, you are helping the population grow. Summer breeding is in northeastern U.S. while they are year round in southeastern U.S.

Gold Finch is the state bird of New Jersey, Iowa, and Washington. The female hatches between 4 to 6 eggs in 12 to 14 days.  While incubating her eggs, the male brings her food to eat and a few days after the chicks hatch.  The baby birds are well cared for.  They leave the nest between 12 to 17 days after hatched, but are continued to be fed by both parents.  American Goldfinches raise one or two broods each year.  Here I must insert that I’ve canaries and love to watch them breed.  A canary is a type of finch.  I’ve had four broods a season, with no more than five eggs to a nest. 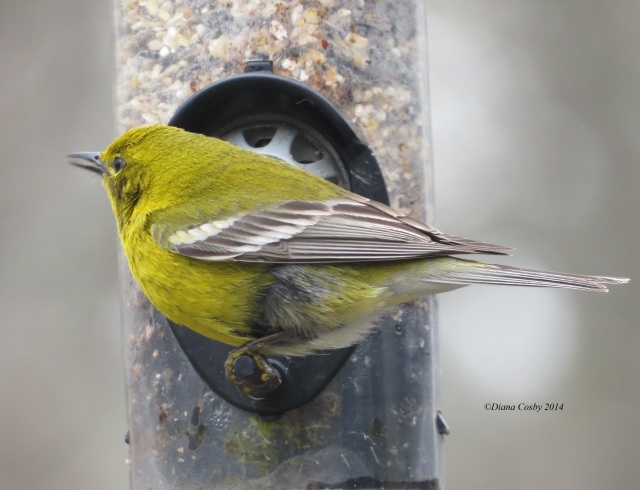 Male Cardinal The northern male cardinal is a  song bird with a loud whistle. Both male and female sing, which is not the case in every bird species.  He usually sits atop a tree, being territorial, chasing off other males.  Comically, if he sees his own reflection, he will relentlessly fight the invading bird. Mated pairs often travel together. Not all cardinals have the same song.  They learn their songs and have different songs for warning or locating their mate.

Carolina Wren is the state bird of South Carolinaand is considered a southern bird with no migration pattern.  Some of the birds will travel northward to Wisconsin, Minnesota and southern New England.  That’s why Diana was able to get a shot of the southern bird.  When winters are mild, the birds build a sizable population, but when winters are severe with food shortages, these birds won’t migrate–they perish.  Make sure if you live in the northern states where these birds migrate to, provide feeders with seeds to feed these little critters.

Carolina wrens are monogamous, usually found in pairs, and each pair stays on its home territory all year.  When preparing for breeding, both male and female construct the nest which can be in branches, tree-holes and even stumps.  They will also use windowsills or mailboxes.

They eat insects and small animals such as tree frogs, fruits and seeds. They’ll eat sunflower heart chips, safflower see and suet among other seeds.

Male Rose-breasted Grosbeak  The Rose-breasted Grosbeak is one of the prettiest birds I’ve seen with a Robin like song sung from the treetops. Its treetop song claims territory and attracts a mate.  As the Carolina Wren, these birds are monogamous.  The courtship is a spectacular scene with the male singing while flying and then there is the courtship dance.  The male will tip his head back holding his tail upright and spread.  He’ll then wag his head and body.

Try attracting them to your feeder by offering black-oil sunflower seed. It is a common bird of wooded habitats in much of eastern and midwestern North America.

House Sparrow  An interesting bit of information about the House Sparrow is it resides in all of North American and is descended from a few birds released in New York City’s Central Park in 1850!  These little birds compete for food and nest sites, where some of the native birds have suffered because of it. They were able to adapt to each local environment from Vancouver, British Columbia, where they are plumb, dark birds, to Death Valley, being slim, pale sand-colored birds.

I hope you have enjoyed these pictures from Diana Cosby and the additional comments provided by me. If you liked them, tell her in the comments section. A most happy holiday season to you my readers, from Booktalk with Eileen. If you don’t have a birdfeeder, why not get one now and help our feathered friends survive our ever-changing climatic conditions.

I am a lover of books, both reading and writing. 2018 marks the beginning of my own journey from writer to published author. This blog will showcase various authors' thoughts on the elements of novel crafting, and my attempts to find my voice in writing. While journaling this journey, I hope to encourage others to follow their dreams. Book reviews continue as I have the last four years, only making time for my new pursuits.
View all posts by eileendandashi →
This entry was posted in Featured Authors and tagged bird watching, Diana Cosby, photograph. Bookmark the permalink.

5 Responses to Not only can Diana Cosby write some serious medieval romance, she’s able to catch an expressive moment in time with her photography.