Posted on October 5, 2014 by eileendandashi 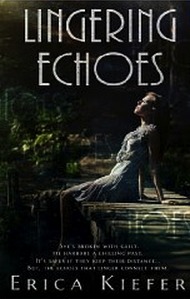 Official Book Description:
“You can’t change the past… no matter how much you want to.”

If only Allie Collins could go back to that tragic day one year ago, perhaps she could escape the guilt that haunts her. In reality, there was no altering her cousin’s death or the role she played.

Then she meets Damien Michaels, a dark-haired stranger on a dirt bike, who seems to watch Allie and know more about her than he should. Veiling his own secrets, including a mysterious scar and tattoo, Allie knows she shouldn’t trust him—especially as she digs up a past Damien desperately wants to forget. She also doesn’t believe in summer romances, yet she finds her attraction to him growing beyond his striking grey eyes. Too late, Allie discovers he is hiding a dark past that is far from over, endangering her life and those she loves.

About the Story: Whether Allie Collins wanted to or not, she was visiting her dad for the summer and he’d decided to head over to  Pines, the place they’d always gone for the summer, where Allie’s cousin had died.

Allie hadn’t spent any time with her dad’s new wife, Clara, who seemed to be nice enough. But her son, Nick, was just plain rude AND nasty. Who would want to spend time with him?

Brooke Cannon had been invited to join the group, some girl Allie’s age, she really didn’t like. Brooke had her eye on Aaron Jackson, a friend of Nicks, who had been invited for the summer. Although it was of Allie’s opinion, how could anyone like Nick have a friend?

But go she must. She could see that the summer would be full of anger and emotions. She was angry with her father, too. He’s the one that made her come.

The summer proved to be exciting and then some. Allie was jumpy and fearful ever since her cousin’s accident. As people tend to do for entertainment, while in the woods, they tell ghost stories while sitting around a campfire. One she’d heard, and apparently true, was about a local boy, close to her age, killing his family, burning them to death in his family’s house.

Brooke was a guy chaser getting herself into trouble. Allie was more the level-headed teen who tried to look out for her. Aaron liked Allie, enjoyed Brooke and tried to look out for both of them. Adventures became near mishaps, where evil was thought to be, wasn’t. No, it came from an entirely different place.

My Thoughts: This young adult romance just blew me away. It was packed with action, fear, definitely suspense and finally dread. This is a story where two young people, Allie and Damien, whose pasts have colored and changed their lives forever start to face them with help from each other and those who care about them. It was superbly written, leaving me on the very edge of my chair throughout its journey.

Allie was running from her guilt. Guilt which had hidden heavy on her soul for the last year. Her cousin lost her life, only 9 years old, and Allie very nearly had, too. But Allie kept on replaying events in her head. If she had just insisted her cousin not try to cross the creek one more time. The rocks were slippery, it was starting to rain, and the wind was blowing. Why hadn’t she stopped her? But can a teen of 14 accept  she couldn’t keep her cousin safe? Hadn’t she been taught to take care of her cousin? The guilt crushed Allie’s spirit, her joy of water sports and her desire to meet people. She only wished she could have taken her cousin’s place.

Then there is Damien Michaels, quite an enigma. He was a terribly handsome boy of 19 or 20 who just seemed to be there. When Allie was at her most fearful, he would appear. No spoilers here, but he has a heavy heart with a past, he, too, is running from. He protects Allie, but sees that to further protect her, would only bring her more danger.

Here’s an excerpt early in the story (chapter 2) which kept me turning pages! I was totally hooked!

My hand brushed against the coarseness of the tree trunks, tracing the lines and curves of the bark with my fingers. Haunting laughter filled my mind, bidding me toward the river I knew too well. With an aching heart, I followed. I kneeled by the river’s side, collecting the fallen pine needles and cones. I tossed them in, watching the ruthless current drag them along. The leaves glanced off protruding boulders before they were sucked underneath the surface.

I let out a long sigh and glanced upwards, allowing drizzling rain to kiss my face. A silent flash of light lit up the darkened sky, followed by a mumble of thunder. As the sky shed its heavy tears, I remained huddled on the muddy soil, staring up into the grayness.

The abrupt rumble of a motor caught my attention, clashing against the sounds of nature. I stood up, straining my eyes through the curtain of rain to find its source. Across the river I could make out a figure on a motorcycle. He was dressed in dark clothing, his head sheltered with a helmet.

He seemed to be staring at me.

Curious, I stared back. Neither of us moved.

What was he doing out in the rain? He was probably wondering the same thing about me, wondering what I was doing outside all alone. Wiping water from my eyes, I took a step backwards, not taking my eyes off him. What was he still staring? I stepped backwards once more, assessing this stranger.

He revved the motor, once, twice, three times. Then he seemed to come to a decision. His bike roared towards me, closing the gap between us. The bridge was off to my right. I didn’t wait to see if he was going to cross it.

Unsure of his intentions, instinct told me to run. I spun around, sprinting towards the cabins. Adrenaline fueled my blood, warming my cold limbs, as I dodged trees and bushes. I didn’t look behind me, even when I was sure the motor was becoming louder, closer. I kept running.

The cabins were in sight. Only then did I dare to glance over my shoulder, my heartbeat thumping in my ears too loudly to hear the motor for sure.

Just as a shiver of relief course through me, I slammed into a body, shrieking as I beat at this chest. His strong arms grabbed me, holding me captive.

With wide eyes and a quick intake of breath, I stared up at Aaron. His arms were wrapped around me, pining my forearms against his chest, ending my struggle.

“Let go!” I shoved against him, uneasy with his restraint, and he released me. Still panting, I glanced over my shoulder once more, swiping rain from my vision.

“What happened? Are you ok?” Aaron put a hand on my shoulder, turning me around to face him. This time I didn’t shake him off, now welcoming the familiar face.

“There was someone—someone out there,” I said, but except for the rain playing its unique melody against the pine leaves, the forest was quiet. Aaron raised an eyebrow. Drenched and hysterical, in combination with my outburst yesterday on the boat, I knew he thought I was insane.

The secondary characters of the story were well-defined. I saw them clearly. The author’s description of nature, the lake, and the feel of the weather, had me experiencing all. As the summer unfolds lots of changes take place with Allie, Nick, Aaron, Brooke and Damien. It’s a great story.

I highly recommend this book. It is one of the better ones I read this summer. Its elements of fear and suspense, knowing something was going to happen, not knowing what, kept me reading with trepidation, eyes riveted to the page. I loved hearing the story from Allie herself, feeling what she felt. If you are so inclined to read this author, I noticed she has a prequel to this book, Rumors, at this writing, no cost on Amazon.com

About this author (courtesy of GoodReads):

Erica Kiefer was born on Christmas Eve in Southern California to an American father whose ancestors arrived from Europe during colonial times and a Thai mother who moved to the US during high school. Adding to her rich and varied heritage, Erica grew up living abroad in Asia, including Taiwan, Fiji, Thailand and Indonesia. She gained a great respect for the beautiful mosaic of cultures found in various parts of the world. After graduating from International School Bangkok, she attended Brigham Young University in Utah, where she earned a degree in Recreation Therapy. Her career as a Recreation Therapist has allowed her to work with at-risk youth since 2007.

Erica made the best decision of her life by marrying her husband in 2005 and is currently a mother of three, one of whom awaits her in heaven. Erica also loves singing, reading, writing, and satisfying her sweet-tooth with chocolate-chip cookies. Playing collegiate rugby was one of the most memorable experiences of her life, thus far.

The first scene came to mind years ago when I was in college. It was a crisp, fall day and as I walked to class, the wind and swirling leaves at my feet created a scenario in my head. When I became bored during my humanities class, instead of taking notes, I started writing a descriptive scene that was intended to simply end as a piece of poetry. Instead, I couldn’t stop thinking about this girl who I envisioned in my head, grieving beside a river on a cloudy, cold day. (I even kept thinking about it while on a rugby road trip, of all things!) I didn’t know until a couple years later when I picked up that piece of writing again that this poetic scene would transform into chapter two of Lingering Echoes.

As for the STORYLINE, some of Allie Collin’s (MC) thought processes come from my own childhood experiences. For instance, the idea of falling in love: In high school and early college, I was a terrible skeptic of love and fearful of marriage. I’m sure some of this was because of witnessing my own parent’s marriage fail (but I still love my parents to death!). There is a conversation that Allie has with Aaron that derives from something a high school boyfriend said to me. (*If you’ve read it, it’s the conversation when they go camping and talk as the sun sets.) Fortunately, my husband was patient and helped cure me of these fears and we’ve been married since May 2005.

I love connecting with readers! If you have any questions, please send me a message on

I am a lover of books, both reading and writing. 2018 marks the beginning of my own journey from writer to published author. This blog will showcase various authors' thoughts on the elements of novel crafting, and my attempts to find my voice in writing. While journaling this journey, I hope to encourage others to follow their dreams. Book reviews continue as I have the last four years, only making time for my new pursuits.
View all posts by eileendandashi →
This entry was posted in Book Reviews, Contemporary Romance, Romance, Young Adult and tagged Clean Teen Publishing, Dealing with Tragedy, Erica Kiefer, Fear of Water, Summer Vacation, Young Adult Genre. Bookmark the permalink.