Posted on August 4, 2014 by eileendandashi 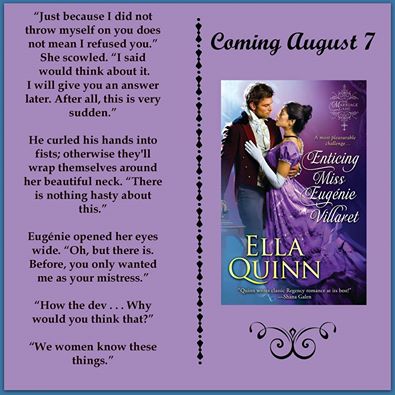 About the Story: Ella Quinn’s intriguing and irresistible bachelors are masters in the game of seduction. But nothing has the power to change a single man’s mind like a captivating woman…

William, Viscount Wivenly, plans to remain the most eligible of bachelors. He refuses to surrender to the schemes of husband-hunting ladies and matchmaking mamas. Fleeing the pressure of the ton, he’s bent on finding refuge in the West Indies. What he finds instead is a fascinating stranger, a woman so unlike those of his society that he can’t resist such a beguiling distraction…

Determined to let nothing complicate her mission to protect her family’s livelihood while covertly rescuing orphaned slave children, Miss Eugénie Villaret does her best to evade suitors. But when dashing William lures her down a path of forbidden adventure and delicious danger, she may be convinced that business can indeed be mixed with pleasure—and persuaded to add passion to her priorities…

My Thoughts: William and Andrew were great friends. They had been for many years. Andrew felt he had to keep William from being rash, inline and control his hot-tempered and passionate advances to women he wanted. William was one for enjoying women, but never to be entrapped by them.

William, Viscount Wivenly, was a determined man. When he decided to do or not do something he held to it. He was very much the womanizer, but never to be snared by any scheming lady. When William had a chance to leave England to see to his father’s concerns about his aunt and daughter he gladly went. He was fed up with the constant hammering at him for marriage and the pressure put on him from frivolous young women trying to trap him into marriage.

While on the island sleuthing for information he became a bit distracted by a female who appealed to his every sense.

“Thoughts of Mrs. –that had to have been what the clod pole of a clerk had said in German—Vallaret stole into his mind. He gave himself an inner shake. This was no time for self-doubt. She was exactly what he’d wanted, and it wouldn’t do to look a gift horse in the mouth. Whoever she was, the woman hadn’t been at all shy when she’d met him eye to eye. A companion, perhaps, to the flighty young lady? She’d been dressed too well to be a maid, yet the gray of her gown did nothing to complement her. At first he’d thought her skin had been browned by the sun—but now, after seeing the different hues—was it the sun? Perhaps she was a light-skinned mulattress, and that was the reason the clerk called her “an armful” instead of being more respectful.

He was almost certain she hadn’t worn a wedding ring. She’d probably had to sell it to make ends meet. Whoever Mrs. Vallaret was, he planned to know her intimately. At last a woman who wasn’t chasing him, and if he must work a bit for it, his conquest would be all the sweeter. A delightful task he’d attend to as soon as his business was complete.”

William and Andrew decided to continue sleuthing by sneaking into Wivenly Imports at midnight. He was not breaking in; after all his father was part owner of the shipping company.

Eugénie took her friend Cicely into her confidence. She needed help to find out what was going on at Wivenly Imports. Since her dad had died at sea, her mother was told that the company was doing very badly and she should consider selling. Her mother was mourning the death of her husband and now this. Eugénie asked her friend Cicely to help her by reading the books of the company. Were they really without money or was someone trying to cheat them? They decided to sneak into the building at midnight to study the books.

So as you would expect, the ladies were looking at the books when William and Andrew showed up. It is really a delicious scene where William discovers that she is his mystery woman (he’d been thinking about her all day), but she doesn’t let him know who she is. Andrew had also see Cicely earlier that day and had been attracted to her. So immediately there is pairing off.

Cicely is quick to see that Andrew is the love of her life. And it appears to be mutual. Eugénie and William are the volatile ones. Eugénie holds secrets of her own helping the unfortunate slaves escape. After William has taken certain advances toward Eugénie and then finds that she is the daughter of his aunt, he feels he must marry her. Eugénie is intrigued by William and is taught how to kiss, but she would never marry a man who doesn’t love her, just wants to bed her. And she has her own mission in life. Would he understand how important it was to her?

I liked the other two books of The Marriage Game I read, but I believe this is my favorite. There are layers of villains to sort through and plenty of action in dealing with them.

Intrigued with the ninety-nine steps which were used to traverse the hill leading up to the houses of the town and mentioned several times in the story, I’m including a picture of them. They were neatly woven into the story. I also became curious about the architecture of the housing where the stairs leading from one floor to the other are on the outside of the house, not within. The author’s thorough research enriched the entire story. 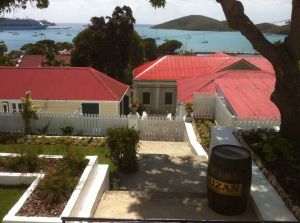 She also wrote about the freed-men, their place in society, and how they were treated. In fact there is a story within a story with Enticing Miss Eugénie Villaret, secondary, but it will long stay with me. Ella Quinn very nicely brought these circumstances into the story making it a large part of who Miss Eugénie Villaret was. Even her father had been caught up in the cause of freeing slaves.

The West Indies non-white population was partly still held in slavery where by 1816 many of the non-white had been freed. There was an underground movement to free slaves. Ironically, those that were freedmen were still held with contempt, sometimes more so since they rebelled from the system.

Author Ella Quinn knows how to squeeze your heart one minute, and have you chuckling with a tickled funny bone the next. William’s painful experience learning to control his urges for Eugénie are enormously entertaining. Mixed with this joviality is danger lurking waiting to strike. Yes, the story is well structured and a real page-turner.  The series is quite delightful and one I highly recommend to Regency lovers who like their stories with spice.

I am a lover of books, both reading and writing. 2018 marks the beginning of my own journey from writer to published author. This blog will showcase various authors' thoughts on the elements of novel crafting, and my attempts to find my voice in writing. While journaling this journey, I hope to encourage others to follow their dreams. Book reviews continue as I have the last four years, only making time for my new pursuits.
View all posts by eileendandashi →
This entry was posted in Book Reviews, Historical Romance, Romance, Women's Fiction and tagged Ella Quinn, Enticing Miss Eugenie Villaret, Regency Historical Romance, The Marriage Game Series, West Indies. Bookmark the permalink.