Review: THE LETTER by Sandra Owens ~ be prepared to be outraged and hate the treacherous hand of jealousy 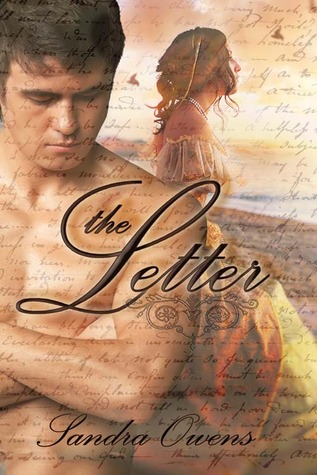 About the Story: When Michael Jefferes, Earl of Daventry read ‘the letter’ he could not control his rage. How had he been played so thoroughly with such devastating results for himself, but particularly Diana, his ex-fiancée and love of his youth? A man of action, he set wheels in motion to find her.

Diana, the only daughter of a marquess, had lost her will to live except for her son, James. She was glad that Leo, Baron Brantley, her husband, had died, but the pain he inflicted on her body and soul remained. She lived with little in a small cottage trying to grow her own food. When the man who gave her a small stipend to use throughout the month started making advances and shorting her allowance unless she would ‘please’ him, she didn’t know where to turn.

When Michael locates Diana he sees she’s not the woman she was 11 years ago. She didn’t want to leave the cottage even though she had nothing there. She was safe from Leo and people. Michael talks Jamie and her into coming with him, gaining some trust from the boy. Both left to provide something better for each other. Then Michael begins working his magic and planning…

My Thoughts: I enjoyed this book right from the outset. Ms. Owen began the story with a letter which played a prominent role throughout. There is nothing better than facing a villain from the first chapter. He was truly evil and probably deranged from jealousy. The reader knows immediately who the villain is. A very nice twist to this story is the villain (someone we all can hate) was dead, yet his deeds were still poisoning those he had wanted to hurt. We learned what he had done through his last letter to his cousin, Michael Jefferes, Earl of Daventry, delivered one year after he died. The reader continues to learn of his horrific acts through dialog from the lovely Diana.

We find Michael stepping up to the plate, trying to right some of the wrongs done Diana—by himself, Leo and her parents. He is a man of wit, passion, sensitivity and caring—more than lovable.

After 10 years of marriage to Leo, Diana’s spirit was crushed. She had been abused physically for the slightest error and then not even that sometimes. So when Michael decided to take her and Jamie away from the cottage, she cowered afraid to be physically hurt when Michael would near her. Michael saw what he was up against. What Leo had done to her made his blood boil with rage. But he dare not show this side of himself for fear of putting her off even further. Michael, one who forever formulates plans (as his father), has several plans to give Diana back her life. In the process of doing so, Michael falls in love again. Diana is drawn to him, but is full of fear. She rather escape with her son and live in a small cottage, independently making her own decisions. She does not want to be ruled by a man ever again. Michael has a great hand in ameliorating Diana’s inner conflicts, teaching her how to beat her demons and eases the healing process physically and mentally.

I simply adored Michael as a character. He personifies the perfect man, in my opinion. Diana was so lucky! He loved to see her smile by weaving silly stories. He had an unusually sarcastic relationship with his valet, promising to fire him at every turn, although both knew that would never be. And he was a planner. Whatever goal he set for himself he reached.

All in all, I found Ms. Owens story entertaining eliciting emotions of heart-break, fear, heartache, hatred, anger, love and happiness. Ms. Owens with her comical and witty dialog make Michael and Diana lovable and a perfect match. I would categorically recommend this book to discerning historical romance readers.

If you’d like to hear about more of her work click the following hyperlink to link to Embracing Romance. http://embracingromance.com/sandra-owens/

I am a lover of books, both reading and writing. 2018 marks the beginning of my own journey from writer to published author. This blog will showcase various authors' thoughts on the elements of novel crafting, and my attempts to find my voice in writing. While journaling this journey, I hope to encourage others to follow their dreams. Book reviews continue as I have the last four years, only making time for my new pursuits.
View all posts by eileendandashi →
This entry was posted in Book Reviews, Historical Romance, Romance, Women's Fiction and tagged Book Review, Sandra Owens, The Letter. Bookmark the permalink.

6 Responses to Review: THE LETTER by Sandra Owens ~ be prepared to be outraged and hate the treacherous hand of jealousy