I’ll be reviewing this novel on Friday.

Will his love burn brighter than his need for revenge? 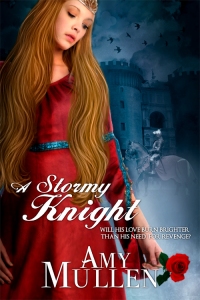 Book Back Blurb: In twelfth century England, Gemma de Vere and Nicholas de Reymes find love at a young age. Too naïve to truly understand what is happening, their fledgling relationship is torn apart by political games and scheming minds. Nicholas and his family disappear into the night and Gemma is left with a shattered heart.

Seven years later, Gemma still harbors a broken heart, and retreats into a life in which she will not be foolish enough to fall in love again. Mysterious deaths and accidents begin to plague those living within the walls of Blackstone Castle, and her father falls ill. She has no choice but to seek the assistance of King Henry.

Help arrives in the form of her childhood love, the handsome and imposing Nicholas, who is now a fierce and loyal knight bent on revenge. The pain and anguish he feels over the fate of his family casts Gemma as his enemy. To him, she represents all the misfortune in his life as he tries to keep her at arm’s length and far away from his heart.

Their journey towards truth is riddled with treachery and danger from an unlikely source. Will they find their way back to each other, or will his need for revenge outweigh the love he feels in her arms?

Excerpt:
“You defy me,” he said as he spun around to face her, “and you do it at every opportunity. You have caused me great pain, and I will have no more of it. You lead my men astray and cause them to be weak. I cannot be lord with you undermining my authority within these walls!”

Gemma steadied her voice, her only option clear, “I shall leave then. I will go to my uncle in Wales. We shall remain married. There is nothing that can change that, so your hold on this land is secure. ‘Tis all you care for. I once loved it here, but living with a man who does not know how to trust me is too much to bear.”

“You are my wife, like it or hate it, and you will do as you are told! You will stay out of my way, and you will not step foot outside of the keep until I say so.” His entire body was tense, his voice harsh.

“Nay,” she said while lifting her chin, “I shall leave. What you do not know, Nicholas de Reymes, is that I love you.”
He froze as she spoke but did not say anything.

“And because of that love” she continued, tears falling in earnest, “I can no longer abide this life. For the second time, loving you has been a mistake. My feelings betray me, and they anger you. I will be gone before I cause you more pain. I will take Isabel with me, and my father can come when he is up to travel. All I ask is you treat him well in my absence.”

“You will do no such thing!” he said. “It makes no sense, and I will not have you telling me what you are going to do. You are my wife, and you will do as I say. I will keep you safe, and I cannot do that if you are not here.”

“‘Tis not up to you,” she said, her voice low, “and you will not stop me. I love you, but I must be stronger than love. I realize now you feel I am the cause of all pain here. ‘Tis only right I lift the burden and leave so all who reside here are safe.” She abruptly left the room, unable to face him for a moment longer.

About The Author: Amy Mullen is a freelance writer and romance author living in Corning, NY, with her husband, Patrick, two children, Rayna and Haylen, and an orange cat named Steve. Her first novel is a medieval romance titled “A Stormy Knight.”

Amy has been writing about love both lost and regained since she was old enough to have her first broken heart. Her love of history and her intermittent jaunts into amateur genealogy led her to a love affair with writing historical fiction. When not writing, she snaps pictures, enjoys the company of her children, and when time allows, loves to bury her nose in a good book.

“I thoroughly enjoyed this hot, yet clean medieval romance. I would highly recommend it. There is suspense and mystery and an aching love between two who fight it but shouldn’t. 5 stars!!!” ~ Casey L. Bond, author of Winter Shadows and Devil Creek

“This was a book I didn’t want to stop reading. It just pulled me forward and I wanted to see everything work out for Gemma and Nicholas. It had mystery, intrigue and danger.” ~ Aimee at Getting Your Read On

“I love medieval romances and A Stormy Knight did not disappoint me! Mullen drew me into the story from the beginning and I found myself enthralled…” ~ Crystal at Books Are Sanity!!!

She dashed down the slope along the outer curtain wall, pulling her dark, heavy cloak snugly around her slender shoulders. It was late, and she worried the abnormally bright moon would give her away. Using care, she stepped lightly. The sounds of boot scuffles and a hoarse, bawdy laugh echoed off the stone walls around her. Her father’s men were on watch atop the wall.

Cautiously, she darted among the trees in the orchard, each blessedly full with the new leaves of spring, until she came to the secret tunnel which ran under the curtain wall and out into a small, wooded spot outside the security of the castle. She prayed Nicholas was waiting for her. He never let her down.

Twelve year old Gemma entered the dark, dank passageway and took a deep breath. Mustering all the courage she could, she ran. She carried no candle or torch, so she counted the steps as she went. Her heart raced and her lungs threatened to burst. Each step brought her closer to fresh air and to his waiting arms.

She slowed down as she came out of the end of the tunnel, feeling a little shaken after going under the heavy, stone wall and then the moat. The moon again illuminated the night for her. The woods around her were bathed in magnificent streaks of silver that filtered through the leaves and landed softly on the landscape before her.

Stepping carefully once more, she inhaled the scents of spring and shook off the darkness. She moved with purpose toward the meeting spot, trembling in anticipation. Gemma lived for these moments and longed to declare her love for him yet again as he shyly held her hand and offered her quick, chaste kisses. Her father wanted her to marry someone powerful from the nearby Bigod family, but she only wanted Nicholas.

She picked a twig out of her long, brown hair after she climbed atop a large, mossy boulder and she waited. They met when his family came to a wedding hosted at her home and instantly became friends. That friendship had evolved into something much more exciting, something that made her heart beat as if it were coming out of her chest. It had to be love. Putting a graceful hand up over her heart, she waited for him to arrive.

The leaves fluttered about in the soft, cool breezes of the night as she waited. Her homeland of England had been in disarray for quite some time, and like the lands around her, things were beginning to calm down. At her young age, her only pressing problem was Phillip Bigod. He was the man her father pushed as a suitable husband. Not only was he ten years her senior, he left her feeling cold. Phillip was outwardly polite and docile, but she sensed something was wrong with him.

Nicholas was late, or he was not coming at all. Gemma twisted around to see if she had missed him, but the night remained still. It was late and most were abed. She was fairly certain her parents were sleeping soundly as well. They had yet to catch on to her nighttime adventures outside of the castle, but she feared her good fortune would not hold out forever.

Gemma’s green eyes popped wide open, and her heart lurched as a twig snapped somewhere in the woods behind her.

She stood up and whirled around hoping to see Nicholas, but instead she saw nothing. There was no answer when she called out to him. Fear swept through her slight frame, and her hands began to shake. Squinting in the dark, she searched for signs of him or perhaps a wayward animal. Another deliberate snap told her she was not alone.

A breeze kicked up and she pulled her cloak tightly around her body once more. Her heart sank. Nicholas wasn’t coming. He was never late, and she had been waiting for quite a while now.

Another noise jolted her. She quickly spun around toward her home and dashed through the woods. As she neared the tunnel, she stopped to look around one last time. Another noise caught her attention, and she peered back, only to come face to face with enormous, glowing eyes. She suppressed a scream as an owl screeched in retreat with a fury of violently flapping wings. Her heart thumped and tears streamed down her cheeks. Scrambling, she went into the tunnel entrance running faster than she had ever run.

One panicked thought ran all the way to the safety of her bed with her. What had happened to Nicholas?

I am a lover of books, both reading and writing. 2018 marks the beginning of my own journey from writer to published author. This blog will showcase various authors' thoughts on the elements of novel crafting, and my attempts to find my voice in writing. While journaling this journey, I hope to encourage others to follow their dreams. Book reviews continue as I have the last four years, only making time for my new pursuits.
View all posts by eileendandashi →
This entry was posted in Historical Romance, New Book Release Tour, Romance and tagged Amy Mullen, debut novelist, historical romance. Bookmark the permalink.