Winds of Betrayal Series by Jerri Hines, soon to publish book 4: Read about the American Revolution and see historical figures brought to life in this wonderful saga 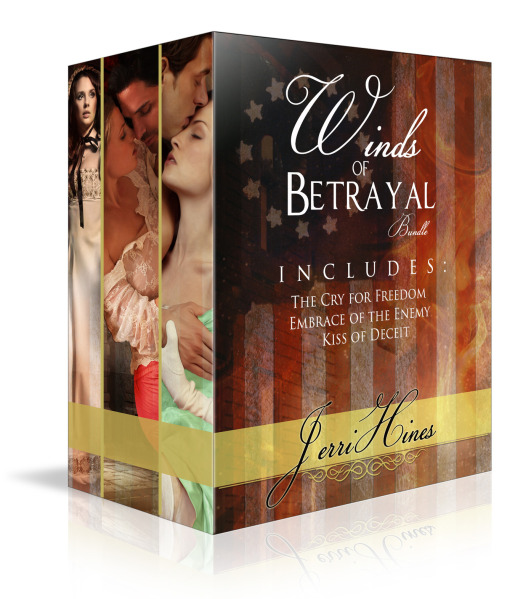 About the Story: Hannah Corbett had always felt that it was unfair that she wasn’t born a man. Her father believed that liberty be for all and had instilled those beliefs in his four children, including his only daughter Hannah. Hannah, growing up with her three brothers, learned to ride and shoot better than they and most of the boys in Williamsburg, Virginia. These qualities along with her passion, wits and survival instincts would soon stand her in good stead in the trying times leading up to America’s independence.

She was soon to wed Gabriel Witherspoon, a very good friend of her brother Jonathan. He was as much involved in the coming rebellion against England as her own family. She loved Gabriel and worried for him, but knew he was safe with her brothers and they would watch each other’s backs.

Brit Marcus Durham was sent to Williamsburg by Hannah’s grandfather with instructions to bring her to New York. Marcus found her at the ball at her parents’ home eavesdropping on an important meeting being held in her father’s study. He found her on the terrace listening intently. He surprised her and himself by sneaking up behind her which ended with kissing her soundly with a fervor which produced pleasurable sensations for Hannah far exceeding kisses from Gabriel. But kissing Marcus was kissing the enemy.

This is a story about families pitted against families each believing in what they did was right and justified. It was also a time of not daring to trust anyone you knew for fear of retribution. It was a time of losing those dearest to you for believing in freedom for all. And for Hannah and Jonathan, it was a time of revenging their family.

Words from Author Jerri Hines herself:

Wings of Betrayal saga is about life during a turbulent time in our nation’s history. Courage comes in many shapes and forms. Some people are born seemingly without fear; others have to draw it from the depth of their soul. Courage is only discovered with fear is faced.

….when I was doing research for Winds of Betrayal… I discovered the Culper Spy Ring. The more I read, the more fascinated I became with the spy ring. Inspiration! Everything one could wish to write a thriller…action, intrigue, danger, love. So the Winds of Betrayal began loosely based on Washington’s elite spy network.

The danger of living the life a spy was enormous. They lived with the constant fear of discovery. If discovered, they faced the hangman’s noose as was seen with the death of Nathan Hale. During occupation of New York by the British, Nathan Hale was caught by the Redcoats and hanged without trial. Afterwards, Washington appointed Tallmadge head of the continental Army’s secret service. With that, Tallmadge established the Culper Spy Ring.

With secrecy being of the utmost importance, Washington never even knew the names of those in the ring. He knew them only by numbers or an alias.

My research led me to speculate about women’s roles during this time. With nothing being more dangerous at that time than spying and the price of being caught for a man was hanging, what about a woman? At the beginning of the war, neither American nor British though women capable of such a deception. But I believe that women were…and would have been quite efficient in their efforts.

The women seemed to have been just as passionate for their cause as the men of that time. Case and point, Margaret Kemble Gage, American born wife of General Thomas Gage, Commander of the British Army at the beginning of the American Revolution in Boston. Did you know that it was highly suspected that Margaret Gage supplied information to Patriot leaders? It was suspected she may have even given the information that led to the famous ride of Paul Revere. Her punishment…General Gage sent her to England.

Although for another woman, I doubt the punishment would have been as lenient, especially after the war began to turn in favor of the Patriot cause. But without question, I write about strong, opinionated women, who have to overcome adversity to achieve their happiness.

Winds of Betrayal saga is a riveting, captivating historical series. I invite you to be swept away back into the past. Enjoy! ~ Jerri Hines, Romance Author

My Thoughts: Jerri Hines’s writing brings us into the very thick of things during this tumultuous time in the birthing of a nation. She has skillfully brought history to life, weaving a remarkably believable story among people whom history acknowledges their roles and sacrifices for a higher cause–creating a nation where its people govern themselves.

I’ve included a link from Wikipedia about the Culper Ring whose mission was to ferry messages of intelligence to General Washington. Hannah, in the story, becomes part of this spy ring. http://en.wikipedia.org/wiki/Culper_Ring

Hannah and her brother Jonathan, both fictitious, exemplify human courage and enduring where endurance is nigh impossible. Jonathan, known for his bravery and compassion to heal both his own countrymen and enemy had a vendetta. He sought revenge on the man that betrayed his family.

This story should resonate with history buffs who also love romance, intrigue and suspense. I recommend the reading of this saga. It was entertaining and as well educational.

I’m particularly glad that I purchased the Winds of Betrayal books 1-3 as a boxset. Each book of the saga was not a stand-alone. It was necessary to read all three to appreciate the story. In just a few weeks we shall be able to continue the series with The Heavens Shall Fall, releasing May 20, 2014. 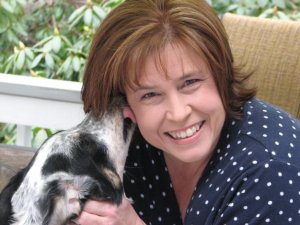 About the Author: Winds of Betrayal series was inspired by Jerri Hines’ fascination with a revolution filled with intrigue, spies, betrayal and romance. The American Revolutionary War Series-Winds of Betrayal is a family saga that follows the lives of two siblings, Jonathan and Hannah Corbett, and their path to freedom. The series includes The Cry For Freedom, a free ebook, along with Embrace of the Enemy, and Kiss of Deceit. The fourth installment of Winds of Betrayal will be released May, 2014– The Heavens Shall Fall. Jerri Hines also has a historical romance series, Tides of Charleston, also set during the American Revolution: The Judas Kiss, The Promise and Another Night Falls.

Jerri Hines also writes under a couple of other pen names including Colleen Connally. Under Colleen Connally, she has written a historical romance series, Secret Lives, which is riddled with romantic suspense and a touch of paranormal. The Secret Lives Series consists of Seductive Secrets, Broken Legacy, and Seductive Lies. Fragmented, Book One Boston’s Crimes of Passion, marks Ms Connally’s first contemporary suspense thriller. 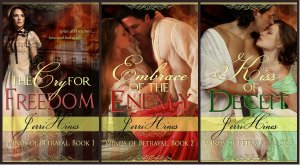 I am a lover of books, both reading and writing. 2018 marks the beginning of my own journey from writer to published author. This blog will showcase various authors' thoughts on the elements of novel crafting, and my attempts to find my voice in writing. While journaling this journey, I hope to encourage others to follow their dreams. Book reviews continue as I have the last four years, only making time for my new pursuits.
View all posts by eileendandashi →
This entry was posted in Book Reviews, Historical Romance, Romance and tagged American History, American Revolution, Book Review, Jerri Hines, The Winds of Betrayal. Bookmark the permalink.

2 Responses to Winds of Betrayal Series by Jerri Hines, soon to publish book 4: Read about the American Revolution and see historical figures brought to life in this wonderful saga