Review: THE DEFIANT ONE by Danelle Harmon–an outrageously funny plot and endearing characters–faults and all 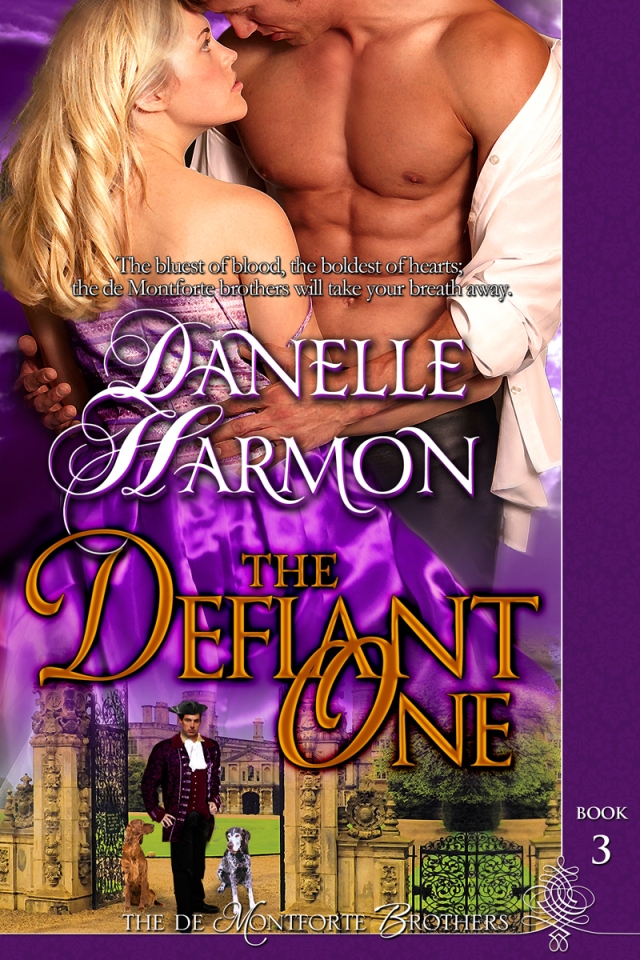 About the Story: Lord Andrew de Montforte, the fourth son of Blackheath Castle of Ravenscombe was known by the villages as The Defiant One. He has a fierce temper and a terrible relationship with his older brother who apparently exerts considerable focus to get his younger brothers married using Machiavellian means. True to form he has his hand forcing Andrew into marriage. He picks the bride and sets in motion the events. All Lord Andrew wants is to be left alone, genius that he is, work in his laboratory and not bother with society, particular since his near death in a fire which has him experiencing odd moments of confusion and delusion. (from book 2)

He is obliged to go to a ball with Lucien, Duke of Blackheath hosted by Lady Celsiana. While there Lady Celsiana verbally confronts him about his abuse of poor defenseless animals. Lady Celsiana loves animals; she works tirelessly to teach people how animals should be treated and to prevent the turnspit (little dog who works to turn the meat on a spit in the kitchen) from malicious treatment by the job that it is forced to do. Once Andrew understands what she’s talking about, he erupts with anger further adding to the scene for all to hear.

The story gets hysterically out of control when Lady Celsiana presents herself at Lord Blackheath’s home demanding to see the laboratory. The servant takes her to Lord Andrew instead– undoubtedly under the orders of Lucien– who happens to be still abed. At this point, I couldn’t stop laughing.

Review: Both Lord Andrew and Lady Celsiana are hot-tempered, intelligent people with a love of nature and animals. They by their very natures find themselves in hilarious circumstances reacting in an outrageous manner for this historical time period. I particularly found their jocular situations amusing. Admittedly, I was laughing out loud, tears streaming down my cheeks.

An added bonus to the story was learning about the plight of a dog known as the turnspit, who unfortunately is now extinct. Lady Celsiana had taken it upon herself to educate people of the living conditions of the work dog hoping to lighten their load. There were many that thought she had a screw missing when she hosted a ball and asked her guests to bring their dogs. I leave you several links giving some history of this dog who was considered ugly and the miserable job they were put to. These dogs performed in arduous jobs in various large mansions, castles, taverns and country inns.

Danelle Harmon wrote a fast paced, delightfully funny plot with witty dialog and characters with multi-faceted personalities and weaknesses endearing them to the reader. Lord Blackheath with his extremely dry demeanor and crafty mind frankly lends more delightful moments of laughter, since as a reader you know what he is doing and how he feels where the rest of the cast does not.

As with the rest of the series, the author leaves us with a gasp of unbelievable glee as we get a glimpse of the next story. I believe we have arrived to Lucien de Montforte’s comeuppance.

If you haven’t had a chance to start this series, you are missing an entertaining and totally enjoyable read.

I am a lover of books, both reading and writing. 2018 marks the beginning of my own journey from writer to published author. This blog will showcase various authors' thoughts on the elements of novel crafting, and my attempts to find my voice in writing. While journaling this journey, I hope to encourage others to follow their dreams. Book reviews continue as I have the last four years, only making time for my new pursuits.
View all posts by eileendandashi →
This entry was posted in Book Reviews, Featured Authors, Romance and tagged Danelle Harmon, de Montforte Brothers Series, historical romance. Bookmark the permalink.

5 Responses to Review: THE DEFIANT ONE by Danelle Harmon–an outrageously funny plot and endearing characters–faults and all