In ALL WE HOLD DEAR, Book 2 in the Too Deep for Tears Trilogy, three generations of Scottish Highland women struggle to find joy in their pagan souls, despite violence and turbulent change in the glen.

“The long awaited sequel to TOO DEEP FOR TEARS spills from the pages with all the dark beauty and high drama of an ancient legend that winds its way around your heart.”–Romantic Times

“I couldn’t put the book down… ALL WE HOLD DEAR is beautiful, passionate and wild like the rugged Scottish Highlands. Excellent reading adventure.”–Rendevous 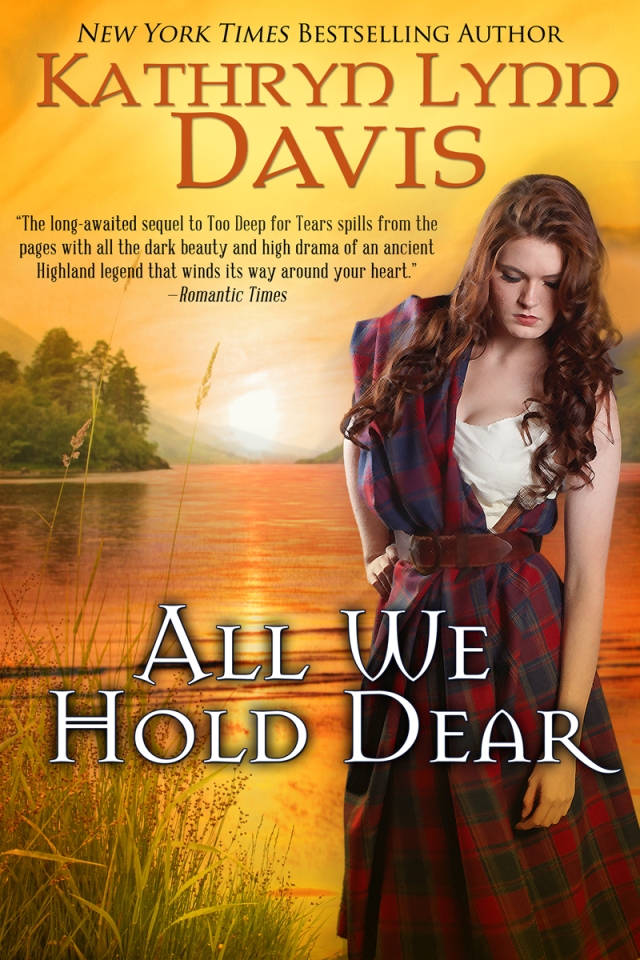 PLOT SUMMARY:
Full of suspense and haunting emotion, ALL WE HOLD DEAR follows Mairi, Ailsa and Alanna, who must call on all their strength and the wisdom of the ancient Celtic gods, when strangers come to Glen Affric. The intruders bring greed, conflict and treachery, pitting brother against brother, father against son, husband against wife. Ironically, however, among them is a new love for Alanna. But more mysteriously, and without intention, they reignite Ailsa’s old and precious memories… In the epic struggle of man against man and man against nature, who will suffer and who will thrive?

Alanna had been too long confined, and her heart beat with anticipation. Things would happen today. There were promises in the air. She could feel them like a teasing caress upon her cheek, like a voice murmuring in her ear—not in words but in sweet, enigmatic wisps of song.

She stopped while the promise in the air took on shape and color, fleetingly. She crept forward, smiling, until she saw the man crouched in the center of the clearing.

The stranger looked up when the sun broke through the clouds but did not shade his eyes. Only then did she feel the tension in his body that spoke of fierce emotion well tamped down. The intensity with which he looked about him, sniffed the air, held out his hands to feel the moisture on his skin, spoke of an energy, coiled and deep and waiting. The sight of it held Alanna in thrall, touched something in her serene, contented soul and made it ache in sympathy and some primitive recognition she felt, but did not understand.

He stood, and she saw he was of medium build. There was power in his stance, in the rise and fall of his breath. Yet his face was suffused with awe and his green eyes glowed.

All at once, she felt she was intruding on a primal, private form of worship. The stranger looked like a man who wanted more than to see the glen; he wanted to know it, as one knew a woman or his God.

Authors Bio:
Kathryn Lynn Davis was born with what the ancient Celts 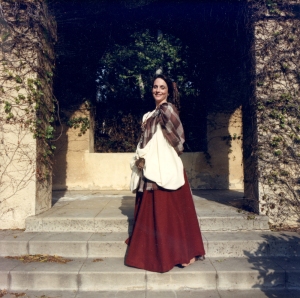 called “the fatal gift of the imagination.” An award-winning, New York Times best-selling novelist, she has published 8 historical novels. TOO DEEP FOR TEARS rose to #5 in seven weeks on the NYT list. Twice she received the University of California Riverside’s Creative Writing Alumni Award for Fiction. She also received the Romantic Times award for best Scottish historical: CHILD OF AWE; the RT Career Achievement Award for the TOO DEEP FOR TEARS trilogy; and the RT award for Best Historical: SOMEWHERE LIES THE MOON, (the 3rd book in the Too Deep for Tears Trilogy). She lives in Southern California with her husband, photographer Michael J. Elderman.

I am a lover of books, both reading and writing. 2018 marks the beginning of my own journey from writer to published author. This blog will showcase various authors' thoughts on the elements of novel crafting, and my attempts to find my voice in writing. While journaling this journey, I hope to encourage others to follow their dreams. Book reviews continue as I have the last four years, only making time for my new pursuits.
View all posts by eileendandashi →
This entry was posted in Cover Reveals, Highland Stories, Romance and tagged Highland Historical Romance, Kathryn Lynn Davis, Too Deep For Tears. Bookmark the permalink.

3 Responses to In ALL WE HOLD DEAR, Book 2 in the Too Deep for Tears Trilogy, three generations of Scottish Highland women struggle to find joy in their pagan souls, despite violence and turbulent change in the glen.