Posted on April 1, 2014 by eileendandashi

Do you ever start reading a book and know within the first chapter that you are just going to LOVE it? That all your fantasies of adventure, magic and love will be met? Seriously, reader, I was not disappointed. This is book 1 of Laurin Wittig’s new series Guardian of the Targe. I’m delighted that I’m catching this series at the beginning. We’re soon to have another sequel  June, 2014. Yes, Ms. Wittig, you have made my day. There is something so, so – well scrumptious about life of the Highlands, particularly in medieval times. Men had to be strong and decisive. Their lives were at stake. They had to have equally strong women with a passion for life. Sigh! 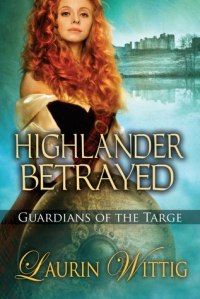 About the Author: (from her own website)
Laurin Wittig comes from a long line of natural story tellers so it only made sense that she was a voracious reader, and eventually became a story-teller, too. She was indoctrinated into her Scottish heritage at birth when her parents chose her oddly spelled name from a plethora of Scottish family names. At ten, Laurin attended her first American Clan Gregor gathering with her grandparents, and her first ceilidh (kay-lee), a Scottish party, where she danced to the bagpipes with the hereditary chieftain of the clan, Sir Gregor MacGregor. At eleven, she visited Scotland for the first time and it has inhabited her imagination ever since.

Early exposure to many cultures led Laurin to study anthropology at Brown University and then International Health at the Tulane School of Public Health and Tropical Medicine where she was exposed to her first computers. Her curiosity led her to a long career in the computer industry, first as a trainer, then as a consultant, and finally as a technical writer. When she dropped out of the paid workforce to stay home with her two children, she used those precious napping hours to write her first book, a contemporary romance, which went on to become a two-time finalist in the Romance Writers of America Golden Heart contest.

Laurin’s first published book, The Devil of Kilmartin (published originally by Berkley Publishing), won the National Readers’ Choice Award for short historical romance, and was a finalist for best first book in that contest and in the Holt Medallion. Her books have appeared on the Amazon Kindle Top 100 Bestsellers list, the Amazon Top 100 Historical Romance list, and the AmazonTop 100 Historical Fiction lists.

Today, Laurin lives in southeastern Virginia with her two nearly grown children, her husband (who refuses, under any circumstances, to ever wear a kilt), and their rescue Eskie.

About the Story: This story takes place in 1307. The prologue introduces us to the hero, Nicholas Fitz Hugh, King Edwards’ most favored Master Spy for England. King Edward has a job for Nicholas, a subject of the king. His mother was Scottish, his father English. Nicholas, who has no conscious and acts as the antagonist at the beginning of the story, does the King’s bidding, however morally wrong or otherwise and only wants praise and money from his king.

He and one other, Archibald, whom he’s known and worked with from time to time for the last 10 years are to procure the Stone of Targe from the Highlands in any way necessary and bring it back to the king. If it can’t be brought whole, destroy and bring a piece.

Nicholas loved this kind of challenge and all was as the king wanted until he found himself saving two lassies that were going to be crushed by a falling wall. The lassies safe, Nicholas looked for Archibald. Not to be found. Well, no matter, he’d look for him later. The lassies could provide him the means to enter the castle for the castle owed him for saving the lives of its members. This very castle local lore spoke housed the Stone of Targe and he was determined to get it by any means.

There are three highland women who play a large part in the story. Two sisters and one cousin. We eventually find that the castle is blessed by good fortune and the people feel safe due to the Stone of Targe. Nicholas is determined to hunt for the stone, get it and get out. However, his heart is snagged by Rowan MacGregor, the cousin of the two sisters. His Highland blood begins to emerge and he eventually decides not to take the stone. However, his original intent is found out. How can he convince the people that he wants to keep them safe? That he wants to help them against the king of England? How can he convince Rowan to trust him again? Will he convince them before it is too late?

Review: There are some books no matter how long they are, they aren’t long enough. Author Laurin Wittig’s leaves us wanting more. She draws us into a Highland adventure with her writing and story-telling ability full of action from the onset. The magic element of the Stone of Targe only adds more appeal to the plot providing mystery about such a stone and its people it protects. I’m a sucker when it comes to anything paranormal AND Highland.

Nicholas and Rowan’s attraction develops with very little physical contact through most of the book, however the reader experiences deeply the pull and chemistry between the two of them. This type of sexual tension is more appealing to me than seeing the heroine bedded early in the story. That being said, the end of the book brings the hero and heroine together in understanding and admiration with a mutual and deep- loving relationship. Wittig’s love scenes are beautiful and show us just how much has grown between them.

The secondary characters are interesting and lend themselves to new, exciting adventures which are already hinted about in book 1. I am ready to read book 2! I highly recommend this book and the series to Highland, medieval romance indulgers. I hope you love it as much as I do.

I am a lover of books, both reading and writing. 2018 marks the beginning of my own journey from writer to published author. This blog will showcase various authors' thoughts on the elements of novel crafting, and my attempts to find my voice in writing. While journaling this journey, I hope to encourage others to follow their dreams. Book reviews continue as I have the last four years, only making time for my new pursuits.
View all posts by eileendandashi →
This entry was posted in Book Reviews, Highland Stories, Paranormal, Romance and tagged Book Review, Highland Romance, King Edward, Laurin Wittig, Medieval Romance. Bookmark the permalink.