Barbara Monajem discusses why Indian Mounds are in HEART OF CONSTANTINE, book 3 of Love & Evil series 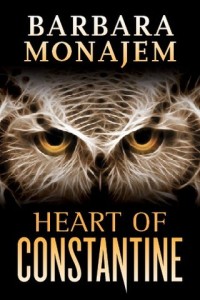 I’m about two-thirds of the way through reading Heart of Constantine, Barbara Monajem’s third book of her Love & Evil series. When an author intrigues and sparks interest about a historical event in her story, I’m all for that. Barbara had me Googling Indian Mounds. Let me share with you something of what I learned. I had never heard of them previously and frankly I find them fascinating. Perhaps you are like me so let me explain a little about them before I turn this post over to Barbara.

I never thought, and obviously naively, there was anything built in the now existing United States which through time could endure before the European came to the eastern shores of this continent. I knew Indians lived in tribes and constructed Teepees. So frankly I was blown away when I found they built conical-shaped burial grounds, however flat on the top. 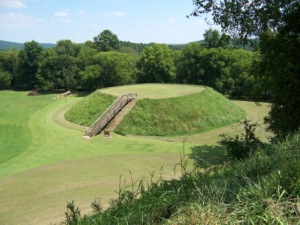 As the Indians were displaced and pushed further west, they left these huge mounds. Thomas Jefferson, one of our founding fathers of the United States actually excavated one and proposed that they were built by the Indians. After a time people forgot what Thomas Jefferson proposed and a theory was offered that they were built by an extinct species, the mound builders.

Through the efforts of archaeologists, some of these mounds have been dated to 800-200 B.C. which is known as the Early Woodland period. The conical-shaped ones were usually used as a burial mound. Some of them reached as tall as twenty meters. I think of them as the Indian version of the pyramids in Egypt.

Between 200 B.C. – A.D. 300 known as the Middle Woodland these mounds were built with more sophistication , and by the Late Woodland period (300-1000 A.D.) mound building was further advanced. Archaeologists have discovered that men and women leaders actually directed and planned the mound building and how the top of the mound would be used. Some of the mounds were shaped like birds or snakes and in some parts of North America they shaped them as animals with four legs.

In Louisiana, Arkansas and Mississippi construction changed around 700 A.D. The mounds were rectangular encompassing a huge rectangular plaza. The most recent period dates back to around 1000 A.D., known as The Mississippian period. This period lasted until the first European contact in southeastern North America.

Barbara shares with us her trip to the Indian Mound Cahokia, located in southwestern Illinois. Archeologists report that they believe this mound is the only North American city-state with a large population. The central pyramid, called Monks Mound, is 30 meters tall and covers five hectares. It is considered one of the largest monuments in the pre-Columbian New World.

Barbara joins us now with her experience at Cahokia.

The Indian Mounds of eastern North America—remnants of early Native American civilizations—were part of the inspiration for my new mystery/romance, Heart of Constantine. This is the third book in my series about the funky little Louisiana town of Bayou Gavotte. I wanted a chance to put some Indian Mounds in one of my stories, because I’ve always enjoyed visiting them—there’s such a spiritual feeling, a sense of ancient civilization about the mounds. Although Constantine Dufray, the rock star hero, is half Navajo and therefore not descended from one of the eastern cultures, he enjoys the atmosphere and isolation of the mounds and the parks that surround them—although not when his enemy drugs Marguerite, the heroine, and leaves her on one of the mounds for Constantine to find. 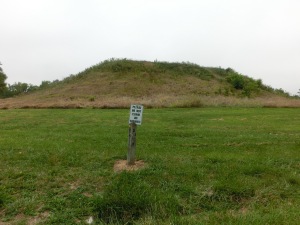 A business trip gave me the opportunity to visit the Cahokia Mounds in Illinois for the second time. It was particularly fun, because they reminded me of parts of the book—such as this sign, forbidding people to climb on the mounds. Both Constantine and Zeb (a teenager who is the third major character) disobey this rule.

It’s quite a climb from the bottom to the top of Monks Mound, the largest at the site. 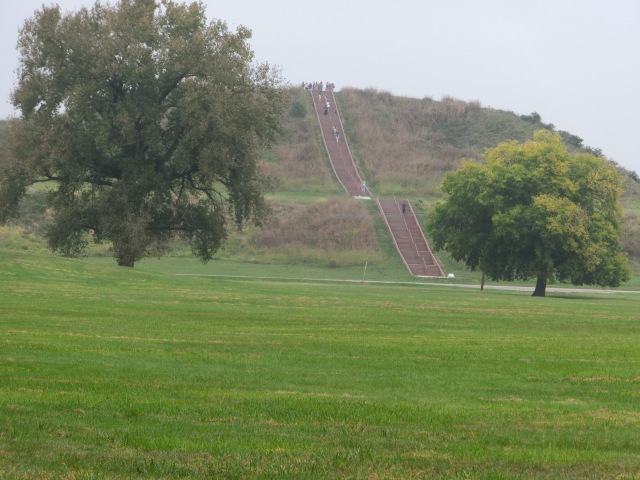 Watching one guy run up and down, up and down the stairs made me think again of Zeb and Constantine, who are both runners. (It was all I could do to walk up and down once!)
Here’s what historians think the mounds and surrounding area used to look like back in the day. There’s a great interpretive centre at the Cahokia Mounds, but I didn’t spend much time there, as it was full of school children on field trips. 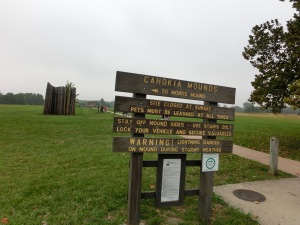 And here’s another sign. One of the warnings really tickled me, but I can’t say why for fear of spoilers.

The mounds and the huge park around them are a great site to visit—and incidentally, they’re just across the river from St. Louis. It was a hazy day, but I tried to get a photo of the skyline. Can you see it, very faintly, in the distance? 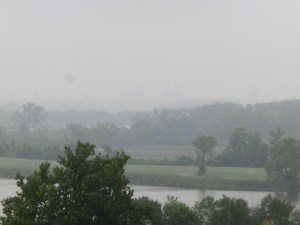 Our chat is finished for today, but don’t forget to come back tomorrow where I review HEART OF CONSTANTINE. Next week we’ll be back with a couple of Barbara’s novellas. The month isn’t over! If you have any questions/comments at all for Barbara please leave a comment below.

I am a lover of books, both reading and writing. 2018 marks the beginning of my own journey from writer to published author. This blog will showcase various authors' thoughts on the elements of novel crafting, and my attempts to find my voice in writing. While journaling this journey, I hope to encourage others to follow their dreams. Book reviews continue as I have the last four years, only making time for my new pursuits.
View all posts by eileendandashi →
This entry was posted in Featured Authors and tagged Barbara Monajem, Cahokia Mounds, Featured Author, Heart of Constantine, Indian Mounds, Paranormal Mystery Romance. Bookmark the permalink.

22 Responses to Barbara Monajem discusses why Indian Mounds are in HEART OF CONSTANTINE, book 3 of Love & Evil series