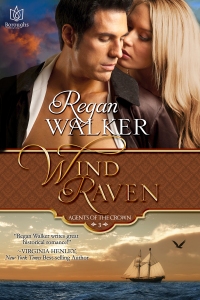 “A salty, sweeping, evocative tale of romance on the high seas—and a good old-fashioned love story that will keep you up far, far past your bedtime. So, reach for the coffee. Brava for Regan Walker!”—Danelle Harmon, New York Times & USA Today Bestselling Author

“Wind Raven is grand romance of the sea with much insight into piracy in the early 19th century and the tropical lifestyle of the island of Bermuda under British rule. The scenes of both everyday life and storms on a ship at sea were well done, very real.” —Jennifer Blake, New York Times Bestselling Author

About the Story: Ordered by the Prince Regent into the Caribbean, English sea captain and former privateer Jean Nicholas Powell has no time for women onboard the Wind Raven, especially not Tara McConnell. The impudent American forced herself aboard, and so she’ll get more than she bargained for: Instead of a direct sail to Baltimore, she’ll join their quest to investigate a rampaging pirate, the infamous Roberto Cofresi.

But the hoyden thinks she can crew with his men, and though he bans her from the rigging, Nick is captivated watching her lithe, luscious movements on deck. Facing high seas, storms, cutthroats and the endless unknown, he must protect his ship, his passenger, his crew. But on this voyage, with this woman, there is a greater danger: to his heart.

“You wished to speak to me, Captain?” Tara tried to remain calm, but being alone with the man who had kissed her twice was, to say the least, disconcerting. She tried not to look at his bed. He leaned against his desk, crossing one booted foot over the other. The sight of his black hair tousled by the wind and his golden eyes framed by his dark eyebrows scattered her thoughts.

“I want you below decks and in your cabin when the storm hits, Miss McConnell. You might even want to tie yourself to the bed so you’re not tossed to the deck. It’s going to be rough.”

“This isn’t my first storm, Captain.” Surely the man must know by now that she could pull her own weight with the crew.

“Perhaps not, but it’s your first storm aboard my ship, and I’ll not be taking any chances with your safety. Is that clear?”

“Perfectly.” He was staring at her as if he wanted to say something more but then shrugged and pushed away from his desk. A sudden lurch of the ship brought her careening into his chest. He steadied her with his hands on her upper arms and, for a moment, stared into her eyes, then at her lips.

Instead of letting her go, he drew her more tightly against his chest, his golden eyes boring into hers. “I don’t seem to be able to resist you this close, Miss McConnell.” She felt the heat between them as he bent his head and kissed her, a kiss as fierce as the storm she knew was fast approaching. Her body seemed to come alive as his arms held her. His lips lifted from hers.

“I wish I had time to show you more, but right now my ship requires my attention.” He set her away from him and, reaching for a chart from his desk, swept up the rolled document and strode from the cabin as if the ship wasn’t rolling beneath his feet.

Tara gripped the edge of his desk to steady herself, and not just because of the swells that had the ship constantly dipping and lunging. Damn the unmitigated gall of the man! What made him think he could kiss her whenever he wanted? More troublesome still, why had she let him?

Holding her hand to her still-racing heart, she could feel the scrape of his unshaven face on her chin, could still taste his kiss and smell the scent of salt air and man. She scolded herself ten times over for allowing the man such liberties, for not fighting harder to convince him she was not his toy for the taking. The fact she had not fought him disturbed her, and left her slightly amazed as she realized, to her dismay, that she was beginning to like the arrogant captain.

About the Author: As a child Regan Walker loved to write, particularly about adventure-loving girls, but by the time she got to college more serious pursuits took priority. One of her professors thought her suited to the profession of law, and Regan realized it would be better to be a hammer than a nail. Years of serving clients in private practice, including a stint in government service, gave her a love of international travel and a feel for the demands of the “Crown” on its subjects. Hence her romance novels often involve a demanding Prince Regent who thinks of his subjects as his private talent pool.

The Agents of the Crown Regency romance trilogy includes the three full-length novels Racing with the Wind, Against the Wind and Wind Raven. Regan has three related shorter works, The Holly & the Thistle, The Shamrock & the Rose, and The Twelfth Night Wager.

There is a prequel to the series. It’s the story of Nick and Martin’s parents, Captain Simon Powell, the young English privateer they called “the Golden Eagle,” and Claire Donet, the wild daughter of the French pirate, Jean Donet, Nick’s namesake, and the son of a French comte. It will be set in late 18th century France, England and aboard Simon’s ship the Fairwinds. It’s a story of adventure, passion and love, for Simon knows if he is to have Claire’s love, he must find a way To Tame the Wind. This book is expected to release early to mid 2015.

My Review: I judge whether a book is a success by how it makes me feel from the beginning of the story to the last page. As a reader I want to feel. Hey, I want to laugh and cry and feel the danger that comes with the story’s action. As one good friend author told me a writer must show the reader, not tell the reader the story. Regan Walker had me feeling the spray of the ocean in my face, my hair and clothing plastered to my body, the chill of my blood when you know, just know that you’re time is up and you’re done for. The story moved quickly, absolutely no slow parts. I wasn’t bogged down in a lot of description, but enough to let me see what the protagonists saw. I can’t believe how quickly I devoured it. It is one of those books that it is very difficult to put down.

I enjoyed how the hoyden, Tara McDonnell, finds it hard to adjust to being feminine in women’s frippery, but finds that she enjoys doing so for the handsome, dictatorial Captain Nick. Ah, it seems love surmounts all difficulties. Both Tara and Nick are very likeable, although both are very opinionated with hot tempers. It makes great dialog and explosive moments that frankly are delicious.

I particularly enjoyed the history of the times woven into the story with an explanation about these famous/infamous persons in an author’s note. Bel Air, built in 1816, actually exists in Bermuda down to the two guest cottages.

If you are partial to romance and pirates or stories on the sea during the 1800’s as I am, you will not be disappointed in this series. It is pure reading joy!

Racing with the Wind: http://www.amazon.com/Racing-Agents-Crown-Regan-Walker-ebook/dp/B008OIWMTM

I am a lover of books, both reading and writing. 2018 marks the beginning of my own journey from writer to published author. This blog will showcase various authors' thoughts on the elements of novel crafting, and my attempts to find my voice in writing. While journaling this journey, I hope to encourage others to follow their dreams. Book reviews continue as I have the last four years, only making time for my new pursuits.
View all posts by eileendandashi →
This entry was posted in Book Reviews and tagged Regency Romance. Bookmark the permalink.