A Guardian’s Truth is about Ariella, a young Guardian Queen of Royals, in the secret land called Isles of Olympus. Forced to sit on her throne before she comes of age, and yet kept in the dark about her history, who her parents were and the life she never got to have with them, after being given to her maternal uncle and his wife, when Ariella was only minutes old. No one would even speak her parents names after that. Frustrated by the constant over protection of the councilmen and women of the Isles, Ariella and her closest friend (whom rarely left her side from the age of four), her dragon Kyith, set out on an adventure within and outside of her realms, that would start the events that could lead her realm back into war. Many enemies are found to be trusted friends, while some friends are shown to be true enemies, Ariella is left wondering: who can she trust, who she should 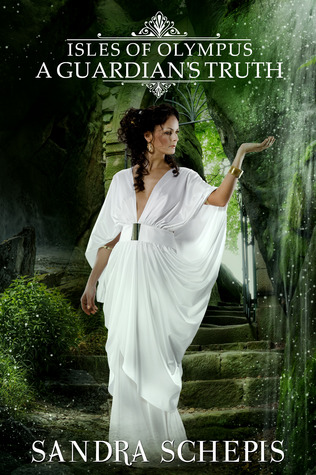 Guardians are descendants of the first two Gods, Uranus, the God of the heavens and sky, and Gaia, the Goddess of the Earth and nature. Their first born child, a son, Gaius, named for both his parents, was betrayed by his younger siblings as they overthrew Uranus by beheading him, so to rule the world and heavens themselves, Gaius wished only to avenge his father’s murder, but Gaia had other plans. She gave him his own realm hidden from the titan’s wrath, and their descendants. A gift for his loyalties, he and his kin and any God, Goddess or magical creature that wished to escape the titans and later the Olympians, would live free of the tainted bloodlines of those that had murdered the father God for greed and power, with only one hitch, no Guardian could ever wish to lay claim to the original homeland of Gods, Mount Olympus.

For if they did, all that had been, could be undone!

About the Author: Sandra Schepis is currently living in the Brisbane Bayside area of Queensland, Australia with her beautiful family. I like to spend most days in front of my computer either writing or researching different elements of my stories and interests in Greek Mythology and history in general. Though I have spent years writing short stories I have never before published any of my work.

Isles of Olympus is different, it is a complete work of towns and cities, landscapes, cultures and lives I spent month creating, so that I could sit and enjoy the story that flowed from the details.

A Guardian’s Truth the first of three books to come out of the Isles series, was a special project designed ultimately for my children to read and enjoy, igniting their imaginations and inspiring their dreams.

I love landscape photography, and use it to inspire some of my works. Mythology weather Greek, Celtic, and some Nordic are keen interests that I enjoy researching; reading is a passion of mine when I am not writing. And in between that and my family I love to get out and explore

I am a lover of books, both reading and writing. 2018 marks the beginning of my own journey from writer to published author. This blog will showcase various authors' thoughts on the elements of novel crafting, and my attempts to find my voice in writing. While journaling this journey, I hope to encourage others to follow their dreams. Book reviews continue as I have the last four years, only making time for my new pursuits.
View all posts by eileendandashi →
This entry was posted in New Book Release Tour and tagged Fiction, Sandra Schepis, YA Fantasy. Bookmark the permalink.