Posted on February 22, 2014 by eileendandashi 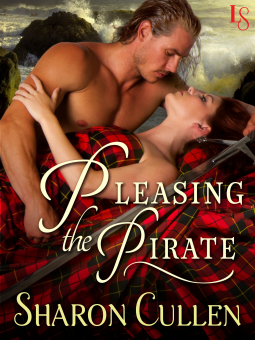 Praise for the series:
The Notorious Lady Anne: “Sharon Cullen’s The Notorious Lady Anne has everything I look for in a romance – swashbuckling adventure, a hero and heroine with sizzling chemistry, and non-stop, leap-off-the-page action. Cullen’s debut is a sexy, fun and thrilling read.” ~ Shana Galen, Bestselling Author of When You Give a Duke a Diamond.

About the Author: Author Sharon Cullen enjoys writing romance, whether romantic suspense, paranormal romance, historical romance or contemporary romance.  This is the third book of her Historical Romance Loveswept Series. A list of her other books can be found on her website.  http://sharoncullen.net/

About the Story: Mairi McFadden, a Scottish lass, with lands that are plundered by the Englishmen, takes one last desperate attempt to locate her brother, Grant, who was imprisoned for treason by the English, but escaped. She has no choice.  Her people need their laird and leader as chief.  Without him, the men are leaving looking for work elsewhere, abandoning the women and children. Mairi tries to help, to take them into the keep, but there is hardly enough food to eat. Times are desperate. She is told that the man to help her find her brother is a fierce pirate, Phin Lockwood.

Phin Lockwood, has been commanded by the king to bring in the Scottish traitor, Grant McFadden or forfeit his own life for his pirating ways. Phin’s high-placed friends don’t want him to hang so they contrive to have Mairi McFadden seek him out to help her find her brother.  Intuitively they believe Mairi McFadden is the key to capturing her brother.

When Phin finds a petite whiskey-eyed woman in his ship’s cabin, pointing a gun at him, he learns that she is the very woman he has been seeking.  The gun is bigger than she is, and very easily taken from her. He hopes to quickly capture the Scottish traitor using Mairi as bait now that he met her.  Mairi barters her meager coins and insignificant gems for his services.  When she sees that it is not enough, she does the unthinkable—she barters herself.  Will Phin have his cake and eat it, too?

Excerpt:
He knocked on her door, his heart beating harshly. Strange, that. His reaction to her bothered him, but he could control himself.

At her soft, “Come in,” he opened the door and stopped cold.

She was bent over at the waist in front of the fire, her delectable derriere front and center.  His mouth went dry.

She looked at him upside down, her hair hanging nearly to the ground.

She jerked upright with a softly exclaimed, “Oh.”

She’d wrapped a thin sheet around her and secured the end between two very plum, soft breasts. With her sudden movement the sheet had slipped and she slapped a hand to her chest to hold it in place.

She had freckles everywhere, even the tops of her breasts.

“I, uh…” He had no idea what he was going to say.  His thoughts went south along with all of his blood. His cock was so hard he feared he’d split his skin.

The fire backlit her through the thin sheet, outlining the apex between her legs. Holy Moses, as Ezra would say.

He looked down at the garments in his hands and suddenly remember his mission. “I brought clothes,” he managed, not at all sure how he forced the words through a throat closing up with a lust he hadn’t felt in a very long time.

My Thoughts:  I was not disappointed with Ms. Cullen’s third book in the series.  I read and reviewed in an earlier blog Loving the Earl. This book spoke to me on as deep level as her first one, probably more so. There are books that you read that leave you saying, that was a nice story and you don’t feel changed in any way.  Ms. Cullen’s writing gives us more.  It left me with a glow of happiness, but only after dealing with some very difficult human conflict.  My inner-self was enriched by the story.

I loved how she used the conflict of nations pairing it with the conflict of men. This was a story about learning how to replace hate with love, misunderstanding with knowledge and with that appreciation that people are basically the same.  It was a story about – when is doing the right thing right?  Quoted from the story: “He’d hoped he would have done the right thing, but one person’s right is another’s wrong.”

Many of you may not remember John Denver’s song, Annie’s Song with the lyrics “you fill up my senses…”  I was in my 20’s when that song was popular.  It made your heart soar with the words and the melody.  Ms. Cullen gave me that same thrill with this story, potent with heartache, fear, the harshness of man, tragedies we endure, and trying to do what is right even when it breaks your heart.  When I finished the story, my senses were filled – no emotion spared.  It wrung me dry then lifted me up with hope in the betterment of mankind and a happy ever after ending.

Sharon Cullen, keep writing the way you do.  You create memorable, heart-rending and soul-satisfying stories.

I am a lover of books, both reading and writing. 2018 marks the beginning of my own journey from writer to published author. This blog will showcase various authors' thoughts on the elements of novel crafting, and my attempts to find my voice in writing. While journaling this journey, I hope to encourage others to follow their dreams. Book reviews continue as I have the last four years, only making time for my new pursuits.
View all posts by eileendandashi →
This entry was posted in Book Reviews and tagged Book Review, historical romance, Sharon Cullen. Bookmark the permalink.