Posted on January 31, 2014 by eileendandashi

I would have read this book for the cover itself. It is simply gorgeous. But I didn’t have to. I know that Cara Elliott writes lovely stories and this one was no exception. 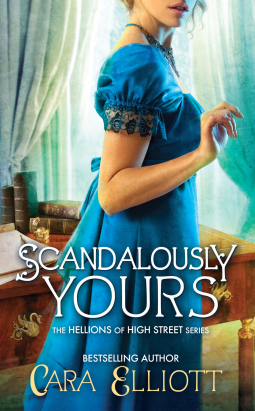 About The Author: A passion for Jane Austen type reads, Cara Elliot writes historical romances in the Regency setting. Her love of romance reads and history has drawn her to write this genre. At Yale, she majored in art and continued her education by obtaining a Masters of Fine Arts in Graphic Design. She is presently the creative director of a lifestyle sporting magazine which gives her the opportunity to use all her talents while traveling.

Ms. Elliot has written a couple of series which are equally as delicious, The Lords of Midnight and The Circle of Sin. This book Scandalously Yours is book 1 of The Hellions of High Street. Book 2, Sinfully Yours will release February 4, 2014. Book 3 in this series is titled Passionately Yours.

About the Story: Olivia Sloane, a-24-year-old woman, free-thinking and not interested in constraints that Polite Society places, secretly writes a column, The Beacon, in the local newspaper discussing and highlighting radical political thoughts for that time in history.

Olivia’s sisters, Anna and Caro are both unique in their own way, too. Anne writes novels under a pseudonym which Polite Society is avidly reading, though she dare not make herself known. Women do not write novels. Caro hasn’t had her coming out, but is already creating poetry and apparently will follow in her sisters’ footsteps. She is also a very intelligent young lady who believes everyone should marry for love, a new idea among the aristocracy.

When the three sisters share their ideas to accomplish what they set out to do, the misadventures and mishaps are extremely humorous and entertaining.

The prim and proper military figure and dashing figure Earl Wrexham must convince the Lords in Parliament that the bill to have the state provide for veterans of war is necessary and just. He means to make them see that these men of service must be folded back into society and have meaningful lives in every way possible. He is determined to have this bill pass, but needs the aid of the columnist writer in the local newspaper who seems to have a very good grasp on the political scene. The columnist doesn’t answer his query so Earl Wrexham snares him outside the newspaper office. But he isn’t a he, he is a she and this she he’s met! She’s the chit that he caught in the library at the ball playing chess with herself.

Prescott, John’s son, is ten years old. He and his best friend Lucy decide to help John, Prescott’s father find a wife and Prescott a mother. They write an advertisement and have it placed in the newspaper.The consequences of this letter creates hilarious misadventures and not some for all.

My Thoughts: Olivia symbolizes a forerunner of our modern society women. Without women like her with her courage we would not be where we are today. I enjoy very much these kinds of stories. Women have struggled hard to be heard throughout the world. Much of the equality women have today is from their predecessors’ struggle to make a better world for themselves and consequently a better world for women today. It is fortunate that women today can still make a difference and give our grandchildren a better life. Now to what I thought about the story.

There is so much humor in this story: Olivia reacting to information in the same manner that we find John reacting, down to the same language, John’s internal struggle with maintaining proper deportment, and secrets that the children have along with Olivia and her sisters.

Prescott, known as Scottie and Lucy his best friend move the story forward by their actions. Not only are they believable but adorable at the same time. I see Lucy as a terror when she grows up and who knows? Maybe Cara Elliot will include them as she writes the continuation of the series. What comes to mind is the adage, out of the mouth of babes. The story is extremely entertaining and will catch you laughing out loud even though the story deals with a serious underlying topic. I already have my eye on book 2, coming out February 4.

I am a lover of books, both reading and writing. 2018 marks the beginning of my own journey from writer to published author. This blog will showcase various authors' thoughts on the elements of novel crafting, and my attempts to find my voice in writing. While journaling this journey, I hope to encourage others to follow their dreams. Book reviews continue as I have the last four years, only making time for my new pursuits.
View all posts by eileendandashi →
This entry was posted in Book Reviews and tagged Book Review, Cara Elliott, historical romance, Regency Romance, Scandalously Yours. Bookmark the permalink.