Posted on January 20, 2014 by eileendandashi

Title: When The Rogue Returns 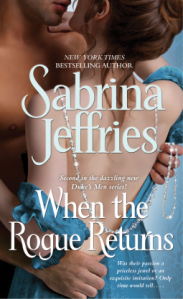 About the Author: Sabrina Jeffries has written 35 novels and eight stories of short fiction. She has more than 6 million books in print in 18 different languages. Certainly this is a testament to the delight that these stories bring to her readers. The Duke Men’s Series as of tomorrow consists of two books: What the Duke Desires and When The Rogue Returns. It is a series based around an investigative agency which was created through pride of family and passion. These men risk their lives to discover devious deceptions and scandalizing transgressions which occasionally having them risk their hearts.

About the Story: Isabella escaped her thieving sister and brother-in-law in Paris when she read in the newspaper that a jewelry maker who made imitation jewelry was moving to Scotland. When she found herself with child she knew she had to escape. She decided to apply for the position of assistant. Scotland would be far enough away for her to begin a new life. If she stayed with her sister and brother-in-law, she would be an accomplice to their thievery. She already was an accomplice to the last theft. What had she done? Where was her husband? Did he truly leave her taking part of the heisted jewels with him? Was his love so shallow that he could do that to her? She knew so little about him—they had been married such a short time.

Victor Cale could not believe that his wife would use him to make a heist on the Dutch royal family jewels. He thought he knew her. She was sweet and shy, certainly no one who could do what she did. But she, her sister and brother-in-law must have been planning it all along. As the night guard on duty when the switch was made, he was the prime suspect. And when his sister and family did not return, the authorities worked on Victor to get him to tell them that his wife and family had done the robbery. Victor held out even though being tortured. He did not tell them. The experience had hardened and embittered him. He spent the next 10 years looking for his wife so that he could seek revenge for what she did to him…until one day through a stroke of good luck he found her. She was in Scotland impersonating a widow using his mother’s maiden name.

While Isa thought her husband had left her running off with part of the jewels, he thought that she had run off with the jewels. Neither trusted the other. Yet, they still were attracted to each other. The flame of passion from ten years ago only burned brighter. Isa was no long the shy, sweet woman. She’s bold and she confronts him about his crime. She’s a lioness and must protect her cub, Amalie, now nine years old. He cannot know that she exists. He will never have her! Victor cannot believe that she is trying to get out of being caught, because caught he intended her to be. He would get his revenge.

My Thoughts: Sabrina Jeffries has the perfect mix of romance, suspense and villainous characters in her stories. They are a delight to read. This series promises to be as addictive as her others. I love women who are changed from sweet to something more. Obviously Victor does, too, because he is ever more drawn to his wife, her boldness pleases him. It doesn’t take him long to be drawn into her net. Likewise, Isa finds her husband to be more attractive and she approves of the changes that she finds in him. But, can they come to trust each other again? Will they be able to share each other’s secrets? If I rated books, this would take a top rating.

I am a lover of books, both reading and writing. 2018 marks the beginning of my own journey from writer to published author. This blog will showcase various authors' thoughts on the elements of novel crafting, and my attempts to find my voice in writing. While journaling this journey, I hope to encourage others to follow their dreams. Book reviews continue as I have the last four years, only making time for my new pursuits.
View all posts by eileendandashi →
This entry was posted in Book Reviews and tagged Book Review, historical romance, Regency Romance, Sabrina Jeffries, When a Rogue Returns. Bookmark the permalink.