Posted on January 11, 2014 by eileendandashi 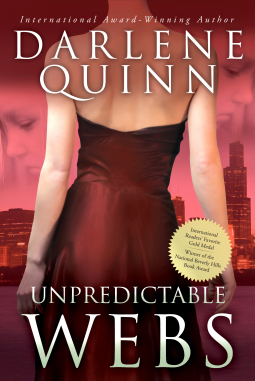 ”On first opening the pages of Darlene Quinn’s Webs series, readers may well feel that they are in for an engaging ”all about” novel–in Quinn’s case, all about the glamorous, dangerous, byzantine, and ultimately exciting world of fashion and high-end retail–and those readers would be right. But wait! There’s more! Quinn develops her storylines and plots in a way that keeps…the books charging forward…nothing is what it seems and no character is without great secrets that will twist events and surprise the reader in breathtaking ways. There’s a great deal of fun and …” Frank Gaspar, poet, novelist, and National Endowment for the Arts fellowship and three-time Pushcart Prize recipient

About The Author: Darlene Quinn, an international award-winning author and speaker lives in Long Beach, California. Before becoming an author in 2007, she was a public school teacher, a self-improvement and modeling instructor and a private contractor for department stores and hospitals.

Sizzling Cold Case, her first novel, published in January 2007, was a work in progress by her dear friend Buddy Ebsen who had passed away before completing. His widow requested that she finish the novel for him which she did with pleasure.

Her next 4 books are a series: Webs of Fate (prequel to the Web Series) Webs of Power, Twisted Webs, Conflicting Webs, and recently published Unpredictable Webs.
All her Web Series are award-winning novels. Unpredictable Webs, is the winner of the Beverly Hills Book Awards and the President’s Choice top prize winner.

About The Story: The main characters of this story are Marnie, Erica, Neil and Rick. Marnie is a twin that had been abducted by Erica’s husband from the hospital when she was born. Her husband has since passed away. Erica was Marnie’s mother for eight years when she was taken as her twin sister Callie, thus leading to events that reunite Marnie with her biological parents. Neil and Rick, half-brothers are son and step-son of Nelson who is Erica’s boyfriend.

Marnie, a sixteen year old, not entirely pleased to be back with her biological parents, is rebellious and rather live with her other mother, meets Neil on the internet. When Marnie plans on meeting Neil face-to-face at a Starbucks, Callie decides to step in to tell him to leave Marnie alone. She walks to the coffee house without Callie, hoping she could have a few minutes alone with Neil before Marnie arrives. Before she reaches Starbucks Callie is abducted from the street and thrown into a van. Marnie, following close behind her sister sees what happens. She has the foresight to use her phone to get the license number of the van. Marnie doesn’t know if Neil is involved or not. Did he set her up? Was this what he wanted all along? Did he know that he had Callie and not her? It was all her fault. She should never have started with him in the first place. She knew how dangerous it was meeting people that way. She ran back to her family as quickly as possible. The police were called and search is on to find Callie. Marnie knew she had to get her twin back. She couldn’t let her be hurt.

There are sub stories within the larger story which Darlene Quinn takes time to build. It adds a better understanding to the personalities of all the people who are in this ‘web’. Some of the characters are conflicted internally and others carry guilt complexes. This would be a very good book for discussion in a book club setting.

My Thoughts: Darlene Quinn’s knowledge in the world of fashion and major department stores and her contacts that she continues to have in high-level positions provided her an excellent basis to write this very believable story. I particularly enjoyed the multidimensional characters, making the ‘bad’ person not so evil because of his other redeeming qualities. This story and events could have played out in so many different ways. It only confirms that our destiny is created by events in our lives but also and more importantly what we do about such events.

There is a lot of growth in Marnie’s understanding of what family is. Neil also learns not to be so trusting. Erica learns how to let go of her baby Marnie. Ashleigh (Marnie and Callie’s biological mother) learns how deep her love is to Marnie and Callie.

Ms. Quinn’s story line was complex, story within story. Darlene Quinn keeps the reader moving from one set of characters to another, to another and to another. The reader, of course, is intrigued, trying to see how these seemingly separate stories converge. Ms. Quinn does this skillfully. The chapters and scenes are longer at the beginning of the story, but by the end of the story, the reader is moving quickly back and forth between the various players of this very suspenseful story. It was an exciting, page-turning novel. If the reader has not read all the previous books in the series, it hardly matters because the author very masterfully brings the reader up to the present story. However, that being said, I would enjoy returning to the prequel to complete the series.

I am a lover of books, both reading and writing. 2018 marks the beginning of my own journey from writer to published author. This blog will showcase various authors' thoughts on the elements of novel crafting, and my attempts to find my voice in writing. While journaling this journey, I hope to encourage others to follow their dreams. Book reviews continue as I have the last four years, only making time for my new pursuits.
View all posts by eileendandashi →
This entry was posted in Book Reviews and tagged Book Review, Darlene Quinn, Literature/Fiction, The Web Series, Unpredictable Webs. Bookmark the permalink.