Posted on January 5, 2014 by eileendandashi 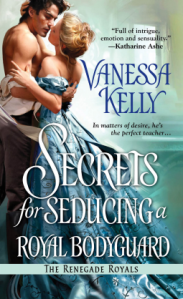 “If the remainder of Kelly’s Renegade Royals series is as arresting and entertaining as this kickoff, then Regency romance fans are in for a royal treat. Capt. Aden St. George of the Royal Horse Guards is the stony-faced hero who fiercely guards his tender underbelly. Lady Vivien Shaw is the vulnerable yet strong-willed woman who resists accepting his protection. Both are meticulously drawn, and their snappy exchanges create exquisite sexual tension…characters who could be flat clichés are made fresh and appealing by dramatic storytelling. Kelly combines diverting dialogue, delightful surprises, and finely tuned pacing to make this a winner.” ~Starred review, Publishers Weekly

About the Author: Vanessa Kelly writes sensual Regency set historical romances and has been recognized many times over for her talented writing. Her second book, Sex and The Single Earl, won the Maggie Medallion for Best Historical Romance. Her third book, My Favorite Countess, was nominated for an RT Reviewers’ Choice Award for Best Regency Historical Romance. She was named by Booklist as one of the new stars of historical romance

Her new series, The Renegade Royals, was introduced in a novella titled Lost in a Royal Kiss.  It came out last month. Secrets for Seducing a Royal Bodyguard will be out January 7, 2014.

Vanessa resides most of the year in Ontario, Canada with her husband, but spends her winters in Florida.  She also writes USA Today Bestselling contemporary romances with her husband under the name V.K. Sykes

For further information about Vanessa link to www.vanessakellyauthor.com or www.wksykes.com

About the Story:  It wasn’t Aden St. George’s desire to get involved with a chit of the ton who had a slightly disputable reputation—off playing cards with high-rolling gamesters.  What sort of lady would do that kind of thing?  However, when she was kidnapped from her family’s carriage, he was commissioned to save her and to deal with her abductors.

Aden, an illegitimate son of a royal prince was a good spy.  For the last ten years he had been kept busy abroad doing a job for his country.  His ability to focus made him an excellent spy. He avoided his family since they had avoided him and that arrangement suited him fine.  His stepfather had ridiculed him throughout his life and his mother virtually had ignored him.  Fine, he was able to take care of himself.  He didn’t need anyone.  However, his recent mission in England had put him face-to-face with Lady Vivien Shaw.  She wasn’t anything like what her reputation led a person to believe.  Aden found her sweet, loyal, vibrant, witty, and intelligent – everything he would want to have in his life.  Relationships however, made life messy.  He needed to focus on being a spy and could not let his guard down. Friends got killed when he let emotion get in the path.  He must take his mission seriously – protect Lady Vivien, but absolutely nothing more.  But what he saw in her eyes and the beauty of her skin and her fragility, pulled at Aden’s gut.  He wanted to protect her, let no one do her harm. But how could he keep from tasting her lips?

Vivien was grateful that Aden rescued her from her kidnappers.  She had been drugged and unable to move and paralyzed with the thought that her abductors would return to her cell and do her bodily harm.  When Aden slipped into the cave past her guards, she thought Aden was there to hurt her.  She struggled with him, fighting for her life. Aden easily controlled her.  Through his voice and eyes he convinced her that he was not going to harm her and he never would.  He told her he was sent by Dominic, a name she knew well, and wanted to take her from the cave. She would have to trust him.  That was the hardest thing for Vivien to do—to trust him. But there was something about him that comforted her.  When he carried her in his arms, she felt safe. He spoke softly and quietly to her. But soon more than trust blossomed in Vivien’s heart.  But she had to keep him from her suspicions of who was behind the kidnapping.  She had to get back home and talk with her brother, Kit without involving Aden further.

My Thoughts:  In Secrets of Seducing a Royal Bodyguard, Vanessa Kelly introduces the first of the men of her series who are troubled men because of their illegitimacy

She does a superb job weaving her story with romance, intrigue, and suspense combined with protagonists who have a sense of humor. Her love scenes flow easily with such sensuality. She is able to virtually grab the reader by her collar and insist that she read by making it virtually impossible to pull herself away from the tale.  This one is no exception.

Vivien and Aden provide the reader much amusement as they learn about each other and deal with the difficulty in keeping Vivien safe.  Aden tries to soothe and keep her from over reacting, however Vivien was the type of person that wants to take control herself, something she has always done to protect and care for her family since her father past away. This unfortunately, only gets her into more trouble, which Aden, true to his promise to her, is there helping her out of those ‘sticky’ moments.

Without reservation, I whole heartedly recommend this read, particularly to those readers who love book settings in the Regency period.  Thumbs up, it’s a winner.

I am a lover of books, both reading and writing. 2018 marks the beginning of my own journey from writer to published author. This blog will showcase various authors' thoughts on the elements of novel crafting, and my attempts to find my voice in writing. While journaling this journey, I hope to encourage others to follow their dreams. Book reviews continue as I have the last four years, only making time for my new pursuits.
View all posts by eileendandashi →
This entry was posted in Book Reviews and tagged Book Review, Regency Romance, Renegade Royals Series, Secrets for Seducing a Royal Bodyguard, Vanessa Kelley. Bookmark the permalink.