Posted on December 30, 2013 by eileendandashi

Ella Quinn’s 3rd book in her series The Marriage Games is just as tantalizing as her first two! 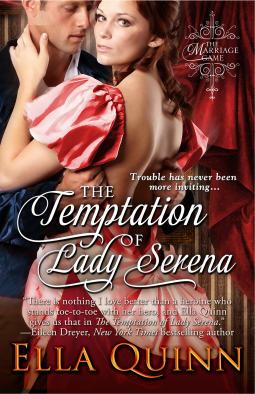 About The Author:  Ella Quinn presently lives in St. Thomas, Virgin Islands, but has lived all over the United States, the Pacific, Canada, England and Europe before finally discovering the Caribbean This book is the third of her Marriage Games Series: The Seduction of Lady Phoebe, The Secret Life of Miss Anna Marsh and now The Temptation of Lady will publish January 2, 2014.

About The Story: Lady Serena, beautiful and self-assured, was forced to leave her family home after living there for 28 years.  After her parents died, she had taken care of the estate and done a very thorough job of it while her brother pursued his own way away from the estate.  But now her brother has come home with his new wife who didn’t want to have Serena stay at the family home. Therefore she was packed off to her Aunt Catherine, Dowager of Marchioness of Ware who intended to give Serena her First Season in London. Her cousin, Phoebe, who had recently married Marcus, whom she loved very much, had come to town to help with her coming out.  Lady Serena’s chances of marriage were slim, let alone a love match which she absolutely wanted.  How would she be able to attract any of the London Polite Society when she had never even attended a proper ball and 28 years old?

One of the many things that Lady Serena did well, was ride.  She felt that a good gallop released her stress, so on the first occasion at her aunt’s, she took her horse, Shamir, up along the crest along the valley. Robert Beaumont was riding his large, black stallion below in the valley and saw a woman up on the crest, on a much too large horse for a lady.  He saw her riding alone which was unusual.  As he was riding up the hill toward her he noted her lovely long auburn hair curled down her back.  When Lady Serena saw him approaching she turned her horse and galloped in the opposite direction.  She was alone and it would be wrong to meet any man while riding. Robert Beaumont was intrigued.  Who was this woman, who rode alone and sat a horse so finely?

A week later Serena arrived at St. Eth House in London, in the Grosvenor Square. Lady Serena found she loved London, but she felt unsure of herself. She settled in and started her round of balls and became acquainted with Polite Society who took her into their bosom.

As happen chance is, Robert Beaumont was a good friend of Marcus, husband to Phoebe.  He couldn’t believe that his friend had succumbed to marriage, no less a love match.  Well Lord Beaumont would not stand for a love match.  He needed a wife for convenience, nothing more.

Robert Beaumont met Serena in London and recognized her as the woman that he saw close to his estate.  He didn’t want to be affected by her charm or her innocence, but he was.  He could not have a relationship with her outside of marriage because she was related to Marcus.  The more he fought his feelings, the more he was drawn in.

Lady Serena did not want marriage to a rake, even though Robert came from a good family.  She wanted a love match, however she was attracted to him which made the situation so much worse.  He made her heart pound faster when he was near.  But she mustn’t desire him.  She may consider him if only he would say he loved her.  But Robert Beaumont knew that he couldn’t love Lady Serena.  It scared him to death.  But oh, he wanted her.

My Thoughts:  Ella Quinn’s writing is a delight.  Her main characters are both individuals that grow and become something more through their relationship with each other.  If you enjoy Romance Regency stories and enjoy watching two people, who are absolutely against any sort of connection, struggling to unweave the tightening hold on their feelings for each other, this book is for you.  It is entertaining watching Robert learn to admire and respect Serena as a person.  He falls hard in love once he realizes who Serena is.  Yes, it ends with a perfect match.  What did you expect – happily ever after! Another of Ella Quinn’s books highly recommended.

I am a lover of books, both reading and writing. 2018 marks the beginning of my own journey from writer to published author. This blog will showcase various authors' thoughts on the elements of novel crafting, and my attempts to find my voice in writing. While journaling this journey, I hope to encourage others to follow their dreams. Book reviews continue as I have the last four years, only making time for my new pursuits.
View all posts by eileendandashi →
This entry was posted in Book Reviews and tagged Book Review, Ella Quinn, Fiction, London, Regency Romance, Romance Regency, The Temptation of Lady Serena. Bookmark the permalink.