Posted on December 22, 2013 by eileendandashi

Another winner from Courtney Milan! 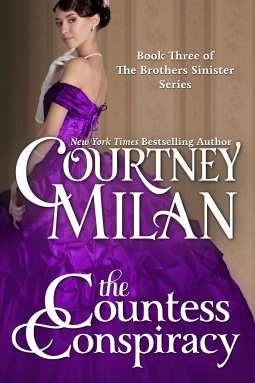 About the Author:   Courtney Milan’s debut novel published in 2010.  Before her very successful coming out, she was a computer programmer, scientist and lawyer.  (more detailed information at http://www.courtneymilan.com/about.php ) Her books have received starred reviews in Publishers Weekly and Booklist.  She’s been a New York Times and a USA Today Bestseller, a Rita finalist and an RT Reviewer’s Choice nominee for Best First Historical Romance.  Her second book was chosen as a Publishers Weekly Best book of 2010.  With only three years of authorship behind her, she has touched many people with her vibrant storytelling, both print and audio as noted by the many reviews found on Amazon and GoodReads.

The following are the books of the series:

½. The Governess Affair (prequel novella)
1. The Duchess War
1½. A Kiss for Midwinter (a companion novella to The Duchess War)
2. The Heiress Effect
3. The Countess Conspiracy

Yet to be published:
4. The Mistress Rebellion
4½. Talk Sweetly to Me

About The Story: Violet Waterfield, the Countess of Cambury, a widow with a brilliant mind was born during the time that women could and should not be brilliant.  Many women who were, hid behind their husbands and let them take credit for any kind of invention or discovery.  Unfortunately, Violet also believed herself ugly, selfish, unlovable and not needed.  Nor could she stand to have a person touch her, not after the way her deceased husband had abused her.  She preferred to be lost in a crowd, to just disappear, but her need to give the world her discoveries set her to have her best friend, Sebastian, work alongside her for five years learning about her research.  He then presented lectures about her discoveries as his own.

Sebastian Malheur was always lacking.  His older brother belittled any accomplishment that Sebastian did and because Sebastian loved his brother and respected him, he believed that he just wasn’t able to do the right thing, although he tried very hard. He was able to make people smile, to make them laugh, but was that enough accomplishment?   Apparently not, for his brother. He had serious issues with taking credit publically for Violet’s scientific work.  When his brother was dying of a weak heart Sebastian asked him to let him be his son’s ward.  His brother refused. Sebastian set out to show his brother that he was better than he thought and with surprising results.

My Thoughts:  Courtney Milan always brings more to her novels than just a good story.  She is able to expose the issues of the day when women were fighting for equality in education, and their acceptance of their contributions in sciences.  This story also highlights that true friendship is one of giving and not asking to get.

Violet’s journey through the story taught her how to love herself, to discover that she was lovable and to realize what real love is.  Sebastian is every woman’s dream—you are sure to fall in love! It is a sweet love story with a woman who has found her strength and a man who has earned her love.

I am a lover of books, both reading and writing. 2018 marks the beginning of my own journey from writer to published author. This blog will showcase various authors' thoughts on the elements of novel crafting, and my attempts to find my voice in writing. While journaling this journey, I hope to encourage others to follow their dreams. Book reviews continue as I have the last four years, only making time for my new pursuits.
View all posts by eileendandashi →
This entry was posted in Book Reviews and tagged Book Review, Courtney Milan, historical romance, The Countess Conspiracy. Bookmark the permalink.