His Enchantress By Diana Cosby — I was enchanted!

Posted on December 16, 2013 by eileendandashi 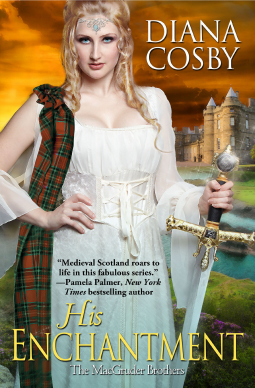 About the Author:  Diana Cosby is an international bestselling author.  Her books have been translated into five languages.  Her travels throughout the world as a Navy Chief have provided a rich treasure chest of cultures that she uses in her writing.

Her inspiration to write the MacGruder Series came from seeing the film Braveheart and her years spent living in Europe.

Diana’s passion to give back is noteworthy.  She participates in these charities:

About The Story: Lady Catarine MacLaren is a fairy princess from the Otherworld.  She and her fey warriors used the stone circle to step into Scotland looking for the English knights who had killed her uncle, Prince Johan.  English knights should not have been able to travel through the stone circle to get to the Otherworld. How had they gotten through? They tried to follow them, but there was no trace.  It was as if they just disappeared.

While searching they stumbled upon the abduction of Scotland’s Kind Alexander III and his queen.  As fey they didn’t involve themselves with the human world.  In fact it was forbidden. They hid and watched as the king and queen were taken away.  The king’s guards fought valiantly, but were overmatched.  Catarine had an urgent urge to go help one of the men valiantly fighting for his king and queen.  As she stood up with her dagger, her guard pulled her back down. After the battle and as they were leaving, she heard a moan – from the man that she had the urge to help–Lord Trálin MacGruder, Lord Grey.

Sionn moved to her side. “Catarine, what are you doing?”

At her voice, the rust-haired Scot’s head snapped toward her.

The impact of his green eyes held hers, pinned her as if a sword to flesh.  Sensation roared through her.

“Who are you?” Lord Grey’s deep burr demanded.

Sword raised, Atair ran back and moved beside her as the other fey warriors formed a protective circle. “Dinna answer.”

Catarine shook her head. “He is nae a threat.”

“You know naught of him,” Sionn warned, his voice rich with suspicion.

Atair nodded to the daunting man. “Who are you?”

The Scott straightened. “Tralin MacGruder, Earl of Grey, Personal guard to King Alexander,” he replied, his each breath rattling with agony. His body began to waver. “Who be—“ On a muttered curse, he collapsed.

“Nay!” She broke through her guard’s protective circle and rushed toward Lord Grey.

Panic slid through her as she faced her senior fey warrior. “I…I must help him.”

Catarine helps him with his injuries and Lord Grey and the fey decide to join forces.  First to go after the king and queen and to take them to safety and secondly for Lord Grey to help the fey find the English knights who have killed Catarine’s uncle.

Both Catarine and Tralin are drawn to each other.  Catarine should not have these feelings since she is fey and she is betrothed to another in her world. Tralin cannot help being attracted and fights his feelings for her.  She is a fey and royalty.  Can or should they fight their destiny?

My Thoughts:  I was enchanted!  The attraction between Catarine and Tralin was palpable.  Diana Cosby has taken me to Scotland with her lovely Scottish burr dialog.  I love the kind of conflict that each character is dealing with. The reader feels the angst of Catarine and Tralin who both want something never thought possible yet because of honor or what is expected by their culture and tradition, they dare not reach for it.
I’m sorry to say that I missed all her previous books, but I hope to mend that situation very soon.  Thank you Diana for taking me to medieval Scotland and a world of fey.

I am a lover of books, both reading and writing. 2018 marks the beginning of my own journey from writer to published author. This blog will showcase various authors' thoughts on the elements of novel crafting, and my attempts to find my voice in writing. While journaling this journey, I hope to encourage others to follow their dreams. Book reviews continue as I have the last four years, only making time for my new pursuits.
View all posts by eileendandashi →
This entry was posted in Book Reviews and tagged Book Review, Diana Cosby, Fantasy, His Enchantress, Romance, Sci Fi, Scotland. Bookmark the permalink.