Posted on December 6, 2013 by eileendandashi

Title: The Adversary, Book 3 of The Sundering Series 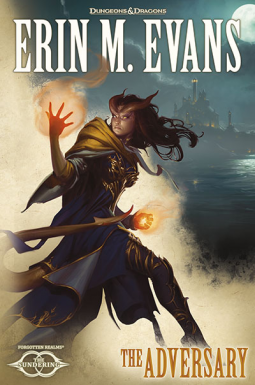 My name is Erin M. Evans. I’m writer and sometime-editor living in Seattle.  I wrote the novels The God Catcher and Brimstone Angels, and the short story “The Resurrection Agent” from Realms of the Dead. You should read them.

Those are Forgotten Realms books. What does that mean? Am I going to have to read a zillion books to understand this?

My current novels are set in the world of Forgotten Realms, which is a venerable, multi-author shared world created by Ed Greenwood, and owned by Wizards of the Coast. You don’t have to read all the books–but you can, which is the cool part. If you like the Great Game of the dragons from The God Catcher, for example, Brotherhood of the Griffon by Richard Lee Byers has more of that.

I found the video very interesting.

It’s only about 4 minutes long, but gives you an idea about the various authors of The Sundering Series. This is book 3 of the Sundering Series that when complete will be six books with six different authors.  Now what is interesting in this series is that each of these authors have used characters from their own fantasy worlds created in previous books they have written and in turn wrote them into this ongoing epic story of the Forgotten Realms – a world of magic, widespread war and vying of power.  The world as known is shifting, things are being shaken up on a higher level and even the gods don’t completely know what is going on.  It’s a huge event that spreads chaos across the entire realm. The stories are about how these changes affect the people.  Erin Evans says, “It’s not about the gods, it’s about their worshippers.”

About The Story: blurb extracted from www.wizards.com/dnd/sundering.aspx

Abandoned as an infant along with her twin sister and adopted by an exiled dragonborn warrior, Farideh grew to adulthood acutely aware of the drawbacks of being a tiefling. Even with outcast tieflings and dragonborn as near neighbors in the mountain village of Arush Vayem, Farideh knew they watched for the day one of the twins would show the stain of their devilborn blood. Despite doing everything she could to reassure them, including keeping wild Havilar out of trouble, the villagers focused on Farideh as the one who would embrace the dark side of herself.

In 1478 DR at the tender age of seventeen Havilar attempted to summon an imp with a borrowed scroll and wound up calling down a half-devil, Lorcan, instead. For all it seemed a lucky accident, Lorcan had been looking for the twins—or someone like them. As a collector of warlocks, Lorcan needed one of these two to complete his most prized set, a Toril Thirteen.  Thirteen descendants of the warlocks whose ritual helped Asmodeus seize the godhood and doomed the tiefling race—and Farideh, as the great-great-great granddaugher of their leader, Bryseis Kakistos, was the last piece.  Toying with her affections, her fears, and finally her love for her sister, Lorcan convinced Farideh to accept a warlock’s pact, confirming what the villagers of Arush Vayem had always said and leaving the twins and their adoptive father to roam Faerûn as bounty hunters.

Though Farideh draws magic from the Nine Hells, she uses it only to protect her loved ones and the good folk she encounters—especially those caught in the sights of devils.  Perhaps she made a mistake taking the pact, but now she has the power to make a difference, rather than bending under the will of those who think she was wicked from the cradle and hiding away.  She might be damned for falling under Lorcan’s  sway, but that doesn’t matter to Farideh.  She can still save those who have a chance.

As the Sundering approaches, Farideh has learned still more about her lost past and her daunting future: the crimes of Bryseis Kaakistos and the Toril Thirteen, the rapaciousness of collector devils. The spell of protection cast upon her and Havilar, shielding them from devils’ scrying magic.  She’s made more than one enemy in the Hells, but she’s gained allies to match, including Harper agents, a scion of one of Cormyr’s royal families, and, of course, Lorcan. Whether he remains an ally, an enemy, or something else, Farideh is still waiting to see.

My Thoughts: This world, The Forgotten Realm is for those fantasy lovers who not only want to play the video games available, but want to read all about that world.

I find it fascinating, but a little much for my understanding.  Orcs and half-orcs, tieflings, demons, gods, devilborn etc. keep my head whirling.  It probably would have been better if I had started out with some of the characters in other books by these wonderful authors. Make sure you check out the video link above.  I felt like I stepped into the land of hobbits!

Some of you just love this stuff and eat it up.  If fantasy and video games are up your alley, then do read this book and the rest of them.

I enjoyed the book.  I had also read book 1 of the series.  I’m figuring by the time the series is finished, I would have figured out all these monsters and what they look like.  Even if you don’t ‘dig’, (do they use that word anymore?) this type of fantasy there are situations between the characters that are very revealing about life in general.  Such as a parent’s love will never lessen.  They will always be there for their children, while children may very well turn their backs on their parents.

Oh, if you would like to purchase a video game for the Sundering, take a look at http://www.dungeonsanddragons.com

I am a lover of books, both reading and writing. 2018 marks the beginning of my own journey from writer to published author. This blog will showcase various authors' thoughts on the elements of novel crafting, and my attempts to find my voice in writing. While journaling this journey, I hope to encourage others to follow their dreams. Book reviews continue as I have the last four years, only making time for my new pursuits.
View all posts by eileendandashi →
This entry was posted in Book Reviews and tagged Book Review, Ed Greenwood, Erin M. Evans, Forgotten Realm, Sundering, Wizards of the Coast. Bookmark the permalink.